Fashion » 11 Iconic Bollywood looks that Pulled by the Classic Actresses

11 Iconic Bollywood looks that Pulled by the Classic Actresses 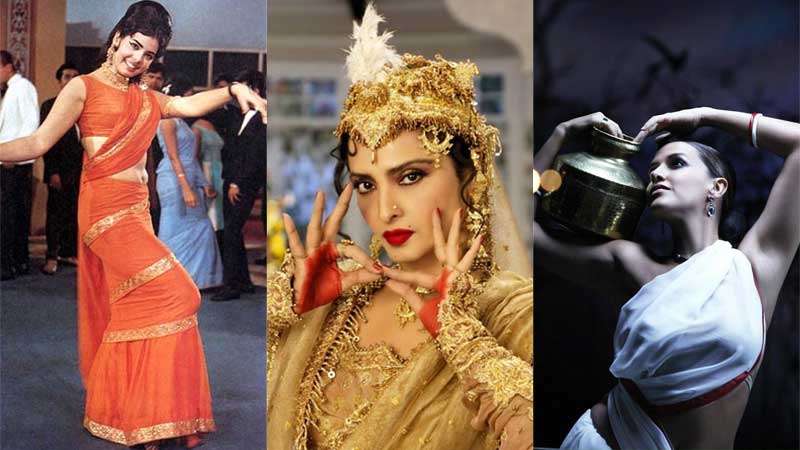 Fashion and Bollywood walk hand-in-hand. The latest fashion trends are somehow the reflections of the past. From the Plazzo, Ghagra Choli to Bikini, all the outfit-ideas are stolen from the classic era. There are many iconic looks that Bollywood has presented before its audience. The legendary Bollywood actresses have given so many inspirational fashion trends that have been copied multiple times. Here we will talk about some of the most iconic outfits and the fashion trends that are gifted by Bollywood. Every Indian girl has a dream to try one of these at least once in her lifetime.

So, here is the list of outfits that are iconic and the actresses that made them iconic.

From school farewells to wedding cocktail parties, the chiffon saree look can make up with every occasion. This look was first carried gracefully by veteran actresses Sridevi in Mr.India, but then it became a legacy of her and she wore a very similar outfit in her Jaanbaaz’s cameo too. This outfit idea is so appealing that our young Bollywood divas copy it on various occasions. From Anushka Sharma in Ae Dil Hai Mushkil, Deepika in Badtameez Dil, to Katrina in De Dana Dan, they all rocked the chiffon saree like a boss.

Madhubala, the mesmerizing beauty, looked beautiful in everything she wore, but her outfit as Anarkali in Mughal-e-Azam has gained the unmatched popularity. Her beauty was enhanced to 1000 times in the Mughlai style dress. The song “Jab Pyaar Kiya to Darna Kya” made her the iconic diva not only of the B-town but in the international fashion industry. Our lovable Rekha wore with the same look and totally nailed it.

Rekha has set examples not only with her acting and dancing skills but with her choices of outfits too. We usually see her all dolled-up at various events, but some of her looks made a mark on the hearts and minds of the Indian audience. Her Umaro Jaan’s “The Kothe Vali” look has made an everlasting impression on our hearts. The “Maroon lips” added the extra stars to the look. If we look closely at Madhuri’s look in “Maar Dala” and Aishwarya’s “Kajraare”, they hold a close resemblance to the look that Rekha carried in Umrao Jaan.

Cotton saree had a very different reputation till Zeenat Aman wore the white saree as the sexiest outfit in Satyam Shivan Sundram. The look attracted many controversies but it will always be remembered and appreciated. The very similar white saree look was fetched by Ganga Singh in Ram Teri Ganga Maili. Neha Dhupia tried to redo this look and looked very compelling in the photoshoot.

“Aj kal Tere Mere Pyar ke Charche” song is the best to groove on. But another attraction of this song is MumTaaz;s Retro Saree Wrap. The orange saree became the party look for a long time. Even, If I ever get a chance, I would definitely try this look. The look was re-created by the most successful Bollywood actress namely Priyanka Chopra in Teri Meri Kahaani.

Who doesn’t love Basanti? She is the most beautiful, bubbly and hilarious character of the era. Hema Malini’s iconic performance and her on-the-point look made this character immortal. The lehenga choli and curly hair added the spices that were needed to make the character look authentic and real. This look became the standard “Village Girl” look for Bollywood. You can see Gracy Singh wearing a very similar costume in Lagaan.

“Bobby”- this movie was way ahead of its times. The scenes, outfits, and songs everything is memorable, of this cult movie. But the most appealing outfit was the knitted crop top of Dimple Kapadia. The polka dots top with black mini-skirt is looking sexy and graceful at the same time. This look was redone by Prachi Desai in Once upon a time in Mumbai.

“Hum Aapke Hain Kaun” is a classic cult that is full of fashion inspirations. From Madhuri’s frocks to Salman’s three-piece suit. But my personal favorite is the backless heavy-embroidered blouse and blue silk saree from the song “Didi Tera Devar Deewana ”. Also, the green and white Sharara was another dress that was on high demand after the release of the movie. If carried with grace, both dresses can make their way in today’s time.

Sharmila has been an iconic beauty but her performance as modern women in An Evening in Paris caught on the maximum attention. She looked extremely glam with knotted blouses and winged liner. However, her bikini look was the most appealing one. It was way ahead of her time, still she pulled it off with grace. Later, the bikini look was repeated several times in Bollywood by top actresses like Priyanka, Kareena, and Deepika.

Cabaret dance is cherished by Bollywood, especially in Gangsta parties. There are many cabaret-looks that Bollywood has given us but the most iconic one is Helen’s look from Sholay. Her dress compliments her moves and she is looking like a professional dancer that is the queen of unmatched beauty. Even, this outfit is the main component of almost every item number of the current era. From Mallika Sherawat to Malaika Arora Khan, you can see many actresses wearing similar outfits in their dance numbers.

These were some most iconic looks of Bollywood. The 80s era was full of inspirational fashion trends, so pick your favorite and get it. Live your dream of wearing on-screen dresses.