Entertainment » Biography » Akshay Kumar Biography- The Khiladi of All Genres

Akshay Kumar Biography- The Khiladi of All Genres 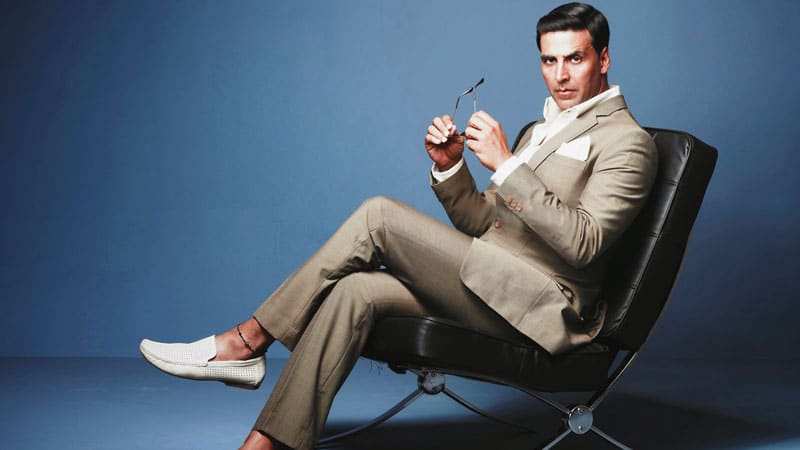 Born on 9 September 1967, Rajiv Hari Om Bhatia a.k.a Akshay Kumar is an Indian actor and producer. One of the fittest and highest-paid actors in Bollywood, Akshay has achieved so much in his entire career till date.  Let’s get up, close and personal with the life of real-life hero Akshay Kumar.

Akshay was born to a Punjabi family and has grown up in the Chandni Chowk area of Delhi. He did his schooling from Don Bosco School and attended the Guru Nanak Khalsa College where he actively participated in sports. Further, he went to Bangkok to study martial arts and also worked as a chef over there. He also lived in Thailand for five years to learn Thai Boxing. Then, he came to Mumbai and started his own martial art school where one of his students asked him to pose for the camera. This is where his modelling career started.

Worked as an assistant for a photographer without payment for 18 months to shoot his first portfolio, Akshay also worked as a background dancer in a number of films. Disappointed with himself for missing his flight for an ad-shoot in Bangalore, he went to a film studio with his portfolio. That day, he was signed for a lead role in the movie ‘Deedar’ by producer Pramod Chakravarthy.

By far, the fittest man in the industry at the age of 52, Akshay Kumar’s fitness journey is older than his Bollywood journey. A black belt in Taekwondo, Akshay likes to live a disciplined life. He has been an inspiration to all of his co-stars and other actors. His famous fitness mantra is to wake up at 4, have last meal before 7 and go to sleep at 9.

A teetotaller and a fitness freak, Akshay has turned pure vegetarian recently and for all his followers he has a simple message ‘There are no shortcuts to build a healthy body and no enhancers, steroids or powder will give you a long-term strong body. Just rely on natural foods, live a disciplined life, exercise regularly and enjoy life’.

Khiladi even has a colourful love journey during which he has dated a good number of actresses like Pooja Batra, Ayesha Jhulka, Shilpa Shetty , Priyanka Chopra and Raveena Tandon. The most serious one was with the actress Raveena Tandon and the rumor came out that they have secretly tied the knot. But after being in relationship for three years, Raveena broke up with him and accused him of making false promise of marriage in an interview. As per reports, Raveena even admitted of getting secretly engaged to him while he was engaged to two other girls at the same time.

His one of the most shocking and talked-about love affair was with ‘Rekha’ that started during the movie ‘Khiladiyon ka Khiladi’. The veteran actress was madly in love with him and when Raveena came to know about it, she asked her to maintain distance from Akki.

He even dated actress Shilpa Shetty but she parted her ways from him when she came to know that he had done two-timing with her best friend, Raveena Tandon. Even after tying the knot with Twinkle Khanna in 2001, he was in news again for being in a relationship with Priyanka Chopra. There were also news about Katrina Kaif and Akshay Kumar being more than friends when they worked together in the movies ‘Humko Deewana Kar Gaye’ , ‘Namaste London’, ‘Welcome’ and ‘Singh is King’. So you can say he was even a Khiladi when it came to relationships.

Akshay made his debut with the film ‘Saungdh’ in the year 1991. In the same year, he acted in ‘Dancer’ that didn’t perform well.

In the following year, he was casted in the Abbas Mustan’s ‘Khiladi’ that is considered as a breakthrough in his career and gave him the name ‘Khiladi’ for his mind-blowing stunts.

In 1993, all of his films including ‘Dil Ki Baazi’, ‘Kayda Kanoon’, ‘Waqt Hamara Hai’ and ‘Sainik’ didn’t perform well at the box office.

In 1994, he played the role of a police inspector in two films: ‘Main Khiladi Tu Anari’ and ‘Mohra’ and both were among the highest-grossing films of the year. Appeared in 11 feature films, Kumar got fame as one of the most successful actors of the year.

The next year, he played a dual role in the action thriller, ‘Sabse Bada Khiladi’ that was a complete success. He continued with the Khiladi series next year too and his fourth film was ‘Khiladiyon Ka Khiladi’ that was again a hit. Till date, there are eight movies in the series, the last one being ‘Khiladi 786’ that was a semi-hit at the box office.

‘Mr. and Mrs Khiladi’ the fifth instalment of the Khiladi series did not make a mark and other following releases failed to perform at the box office and were a setback to his career. The movie ‘International Khiladi’ opposite Twinkle Khanna was also an average grosser at the box office.

In 2000, the movie ‘Hera Pheri’ came out to be a turning point in his career and was a commercial hit. He got all praise for his acting in the movie ‘Dhadkan’, however, the film performed moderately at the box office.

‘Khiladi 420’ was the movie where he performed some of the most dangerous stunts and it is considered as one of his finest performances. From there, there was no looking back. Among the hits and misses he gave, ‘Mujhse Shaadi Karogi’ got him all praise for his comic timing and the way he carries the evil streak in his personality.

‘Aitraaz’ is considered as the boldest film of Akshay where he was wrongly accused of sexual harassment by his boss played by ‘Priyanka Chopra’. In the year 2005, he acted in movies like ‘Waqt: The Race Against Time’ and ‘Garam Masala’. Both are his best pieces and that too in two completely different roles.

In 2006, he starred in ‘Phir Hera Pheri’, the sequel to ‘Hera Pheri’ that also was a hit. 2007 is considered as one of the successful years of his career with 4 hits and no flops. ‘Namastey London’ made him win the hearts of millions and earned him a nomination at the Filmfare.

The next two releases ‘Heyy Babyy’ and ‘Bhool Bhulaiya’ was again a hit. Kumar’s first hit of 2008 was ‘Singh is King’ that broke the first-week worldwide record of ‘Om Shanti Om’. The same year, he debuted at the small screen with the host of the show ‘Khatron Ke Khiladi’ and hosted the same in 2009 too. ‘Chandni Chowk to China’ and ‘8×10 Tasveer’ were a complete failure at the box office.

In 2010, ‘Housefull’ earned the second-highest opening weekend collection of all time, however, ‘Khatta Meetha’ was an average performer. The year 2012 began with the sequel to Housefull, ‘Housefull 2’ that received mixed reviews. His next film ‘Rowdy Rathore’ was a huge success at the box office and was declared a blockbuster. ‘Oh My God’ that stirred controversy was also a super hit.

Akshay Kumar has also given us some brilliant films based on social issues, like ‘Pad Man’ and ‘Toilet: Ek Prem Katha’, inspirational biopics like ‘Kesari’ and ‘Gold’. Akshay’s film Mission Mangal is based on real events is his another finest piece.

Akki’s latest release is in December 2019, ‘Good News’ that is his own production. It is a romantic comedy about surrogacy, starring Kareena Kapoor Khan, Diljit Dosanjh and Kiara Advani.

Akshay’s filmy career has been very much a hit-and-miss affair. Here are some other hits and flops he has given during his career till now.

Hits- Special 26, Holiday: A Soldier Is Never Off Duty, Rustom, Baby, Airlift, Gabbar is Back, and the list is endless.

Misses- Action Replayy, Tees Maar Khan, Once Upon a Time in Mumbai Dobaara!, Boss, Brothers, Thank You, Patiala House and others.

His total worth is 1,192 Crore that has led him to stand in the row of India’s richest actors.

Bollywood is known to be ruled by the three Khans- Aamir, Salman and Shahrukh. But if we talk about one senior actor who can give them a run for their money, undoubtedly it is Akshay Kumar.