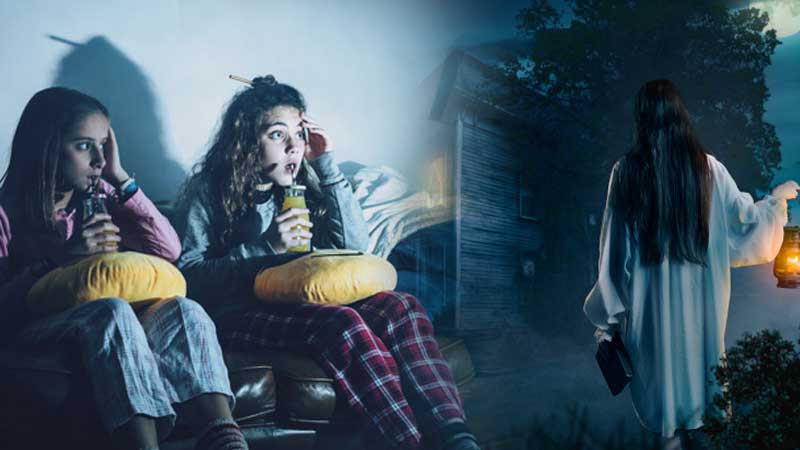 Do you always think of Bollywood horror movies as a purani haveli with creaking doors, Ramu Kaka creating nonsense stories about the place, and evil-looking faces trying to scare you but in vain? Some horror movies made by Bollywood are so bad that we as an audience might have stopped believing that horror and Bollywood films can co-exist. Due to some failed attempts at horror, we cannot deny that Bollywood does produce gems. I knew that you are not going to believe this and that’s why I am ready with the list of top 13 Hindi horror movies that screams for a must-watch promising you a scary ride:

‘1920’ the horror movie will surely send chills down your spine especially during the second half. Set up in a mansion, the film set a benchmark for upcoming horror movies the time it was released. Some of the frames are shot in a truly artistic way; It is one of the few Bollywood horror movies that has actually justified its genre.

Inspired by ‘What lies Beneath’, ‘Raaz’ is an engrossing supernatural thriller. The couple heads out on a vacation to give a second chance to their marriage without knowing that the spirit is waiting to reveal some dark secrets about the past. The songs of this movie were also a hit and justify the theme of the movie.

13 B depicts a different kind of horror and with its strong script and powerful performances by the case, the movie stands tall in the list of the best horror movies of Bollywood. 13B is a must-watch if you are a suspense-horror lover; everything from storyline, theme, sound effects, to plot twists, adds to the perfection of the movie.

The name says it all; a horror story is all you need to run out of your room screaming. If you are really looking for something to make you shiver out of horror, a horror story is what you should watch. A haunted hotel, a group of youngsters, and that is when everything gets complicated.

Konkona Sen Sharma has really managed to scare the audience with her powerful performance. ‘Ek Thi Dayan’ manages to retain the suspense and horror till the end; if you were not watching this movie thinking of it to be average, hold your chair tight. I promise it is not just another stupid ghost story and will keep you hooked till the end.

‘Darna Mana Hai’ is not just a typical horror story; a group of college friends stranded on a lone empty road just to recite horror stories to each other and to find out that each one of them starts disappearing. Spooky enough, right? The six short stories are full of suspense and horror that you will not feel the need for a loo break. JK!

This Indian supernatural horror film by Ram Gopal Varma stands as one of his best works. The movie managed to create suspense and retain it till the end. Urmila Matondkar played her part very well who gets affected by the spirit of the previous tenant of the flat. You will get a lot of scream-out-loud moments throughout the film.

Tumbbad definitely calls for a theatre-watch, but in case you have missed it, do watch it for a spine-chilling experience. With strong visuals and metaphors, this psychological film was shot in the actual village known as ‘Tumbbad’ that makes it much more haunting. The apt background music is there to give you eerie-filled curiosity.

This film depicts the much-hyped topic ‘Black Magic’; although the film is not that scary but scary enough to keep you attentive throughout. It can freak you out if you do believe in the concept of black magic. Ashwini Kalsekar creates the right atmosphere with her eccentric behavior and all the other performances are also on point.

One of the best horror movies in Hindi, ‘Bees Saal Baad’ was the highest box office grosser of its time. ‘Kahin Deep Jale Kahin Dil’ can still spook you out if you are alone on a road. The black and white filming adds to the eerie effect. Biswajit Chatterjee and Waheeda Rehman definitely set the standard for horror films with this flick.

One of the best Hindi horror movies and the first horror movie made in Bollywood, Mahal revolves around the topic of reincarnation. The movie will surely scare the hell out of you; with songs like ‘aayega aanewala’, this movie can keep you awake for nights and haunt you for decades.

Shaapit depicts the story of a family whose daughters are suffering due to a curse and that curse is carried from generation to generation. This film, just like every other Vikram Bhatt movie has managed to make the audience freak out. The story may make you start believing in curses and evil spirits; definitely one of the best Hindi horror movies of its time.

These were some of the best attempts of Bollywood at horror movies; do watch it at your own risk.