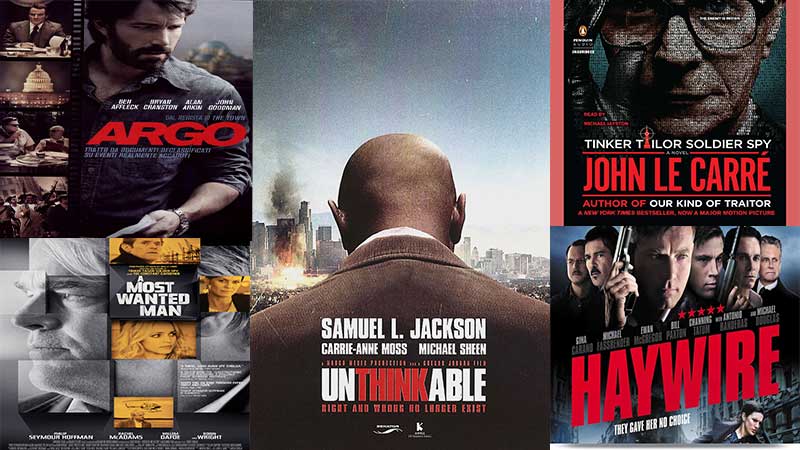 Here we are listing one of the best spy movies that have been made in the past decades, which you will find easily on the Over the Top (OTT) platforms or streaming services like Netflix, Amazon Prime Video, Disny+Hotstar, etc.

We are also including the IMDb rating of the films. So, if you are interested to watch the best spy movies, that have rocked the big screens and the box office Read the full article below to know.

Samuel L. Jackson in the role of Henry Humphries, a black-ops officer, Michael Sheen is playing the antagonist Yusuf Atta Mohammed and Carrie-Anne Moss is essaying an agent’s character, FBI counter-terrorism head. It is available on the digital platform Amazon prime, IMDB Rating 7.1 out of 10.

David Leitch’s directorial Atomic Blonde is based on the novel The Coldest City written by Antony Johnston. It revolves around an MI6 agent Lorraine Broughton’s quest for double agents. The film is critically acclaimed and has accumulated 100 million dollars at the box office.

It has an IMDb rating of 6.7 out of 10 and is available on the streaming platform Netflix. It stars Charlize Theron, James McAvoy, John Goodman, and Tli Schweiger in pivotal roles.

This historical spy thriller has an IMDb rating of 7.7/10 and is available on the leading digital platform Netflix. It is directed by Ben Affleck, he also acted as the main lead along with Bryan Cranston, Alan Arkin, John Goodman, Tate Donovan.

It was released in October 2012 and received several awards at the Screen Guild, British Academy, and Critics Association awards of Los Angeles film, Not only this the film also superhit at the box office.

Steven Soderbergh’s directorial Haywire was released in Jan 2012. Critics praised the film for its action sequences, choreography, and in particular Steven’s direction. You will find it on the streaming service Amazon Prime Video.

The Lives of others

The Lives of Others is set in the time of the Berlin Wall in the ’80s, the film has an IMDb rating of 8.4 out of 10, it is available on the giant digital service Netflix. Helmed by Florian Henckel Von Donnersmarck and baced by Max Wiedemann along with Quirin Berg under the banner of wiedemann & Berg in association with Bayerischer Rundfunk Arte and Creado Film. It was released on 23 March 2006.

Garry Oldman starrer this cold war spy film is based on the novel Tinker Tailor Soldier Spy written by John Le Carre. The film was released on 16 Sept 2021 in the United Kingdom and broke several box office records at the British box office that time.

It is available on the streaming platform Netflix, with an IMDb rating of 7.1 out of 10. Directed by Tomas Alfredson and backed by Tim Beaven along with Eric Fellner, Robyn Slovo, and Peter Morgan.

A Most Wanted Man

Veteran actor Philip Seymour Hoffman starred in this espionage thriller is based on the novel A Most Wanted Man written by John le Carre.

It was the actor’s last film, he passed away in Feb 2014. It is available on the OTT platform Amazon Prime Video and has an IMDb rating of 6.8 out of 10.

Zero Dark Thirty is a spy thriller movie starring Jessica Chastain, Jason Clarke, Jennifer Ehle in pivotal roles. It was released on 19 Dec 2012. The film was a box office hit that collected an overall 132.8 million dollars at the box office worldwide and was nominated in several awards shows including the academy awards that time.

The film is based on the manhunt of the Al Qaeda leader Osama Bin Laden who was the main culprit behind the 9/11 attacks. It is available on the OTT platform Amazon Prime Video. IMDb rating is 7.4/10.

The First film of the hit Kingsman franchise Kingsman: The Secret Service is a spy comedy-thriller film directed by Matthew Vaughn and backed by Matthew Vaugh along with David Reid and Adam Gibbons. It stars Colin Firth, Samuel L. Jackson, Mark Strong, and Taron Egerton in pivotal roles. The film was a huge box office hit, it minted 414.4 million dollars overall at the box office worldwide.

The prequel of the Kingsman trilogy is slated to hit the theatres on 22 Dec 2021. IMDb rating 7.7 out of 10 and available on the Disney+Hotstar OTT platform.

The Good Shephard is a Robert De Niro directorial 2006 spy film, it features an ensemble star cast Matt Damon, Angelina Jolie, Robert De Niro, Alec Baldwin, and William Hurt in significant roles. It has an IMDb rating of 6.7 out of 10 and is available on the leading streaming platform Netflix.

It was made under the banner of Morgan Creek Productions with the collaboration of TriBeCa Productions and American Zoetrope. It did the business of 100.3 million dollars at the box office worldwide.