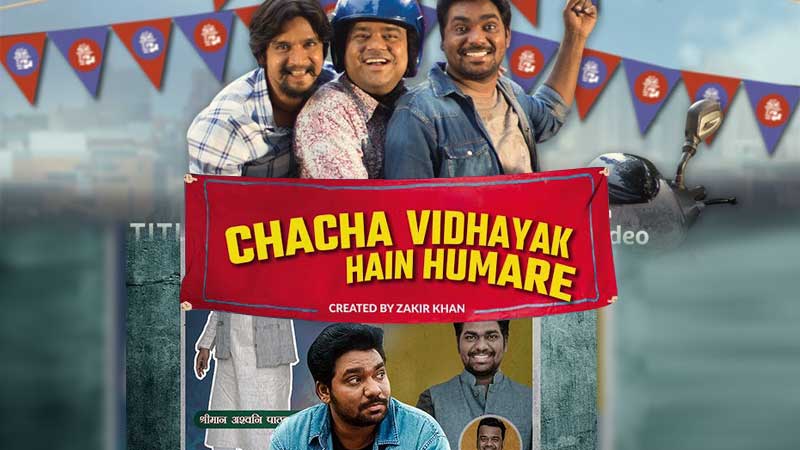 Have you gone bored by watching violence and abusive behavior being portrayed by web series these days? Are you looking for a fun web series that can bring a smile to your face? Then I have a great option for you. Zakir Khan is here with his own drama series. If you have ever watched him performing stand-up comedy, then I need not say anymore about how amazing he is at making people smile. So ya, if you are looking forward to a relaxing weekend, here is all the information you will need about Zakir Khan’s top web series.

Stand-up comedy artist Zakir Khan has become a household name after the release of his web series ‘Chacha Vidhayak Hai Humare’ which is an amazing mixture of relationship, love, humor, and emotion.

The web series is based in the city of Indore, and the story follows the life of a 26-year-old unemployed young guy, Ronny, who thinks of himself as a youth leader. As per the title of the web series, Ronny keeps on boasting around by telling everyone that his uncle is an MLA so that no one messes with him; however, there is no truth in that. And how, this lie puts him into awkward situations and in danger has been nicely visualised in the Zakir Khan’s style of storytelling.

Most of the characters of the web series are relatable and that’s what makes it worth binge-watching. So, if you want to watch a light-hearted web series with no involvement of violence and foul language, then Chacha Vidhayak Hai Humare is the one great option for you.

Makers have even released Season 2, so if the first season interests you, you can go on binge-watching Chacha Vidhayak Hai Humare Season 2.

Where to Watch All the Episodes of Chacha Vidhayak Hai Humare Season 1?

Here are the details of the lead cast and crew of Chacha Vidhayak Hai Humare Season 1:

Can You Download Chacha Vidhayak Hai Humare Season 1 for free?

Season 1 of the ‘Chacha Vidhayak Hai Humare’ web series is available to download on Amazon Prime Video. Get the 30-day free trial to watch or download the ‘Chacha Vidhayak Hai Humare’ series or buy the Amazon Prime subscription at Rs. 129 per month. The subscription fee of Amazon Prime is the least expensive, and you get to watch a lot of movies, TV shows, and web series including the latest ones that are officially released on the platform.

There is no way you can download the first season of the ‘Chacha Vidhayak Hai Humare’ web series for free except one i.e. torrent sites.

‘Chacha Vidhayak Hai Humare Season 1’ was leaked by one popular piracy site Filmyzilla and all the episodes were made available for free download. The web series was even available on several other torrent sites like Dailymotion, Moviesda, Gomovies, Putlocker, and 9xmovies.

These sites have been illegally leaking web series for free causing a huge loss to the makers. However, the government has made several efforts to put a complete ban on such websites but has been unable to do so as they are quite many in numbers.

Please note that downloading or uploading pirated or copyright-protected content is a criminal offense in Indian and anyone found involved in promoting piracy in any form is subject to jail term including other legal charges under the concerned law.
Disclaimer- We do not promote or endorse websites offering pirate content and the illegal ways of downloading or watching movies, TV shows, and so on. The readers are always advised to go for legal ways to watch the copyright-protected content.