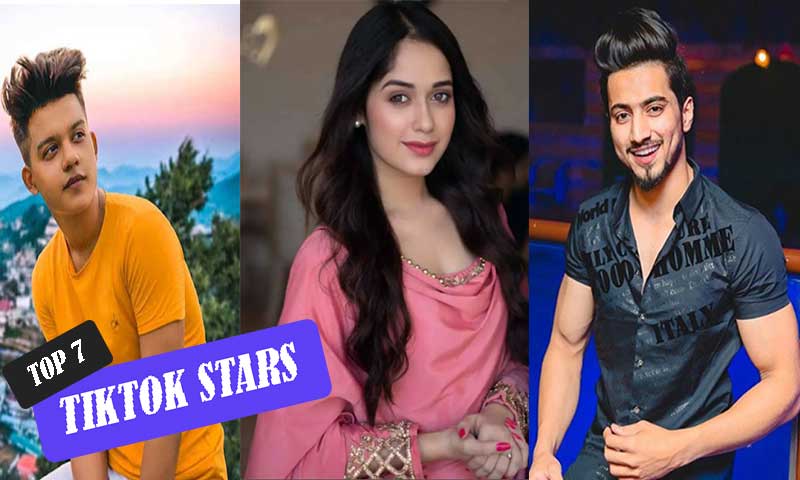 TikTok is the social media app for creating and sharing short lip-sync, comedy, and talent videos, launched in 2017 by ByteDance. It is one of the most downloadable apps hitting the internet after Snapchat and has taken the web by storm by enabling everyone to make and share small videos. Indian TikTok stars are earning money on this platform from their videos and it becomes the second biggest platform for creators after Youtube. A lot of people are earning a good name, fame, and money as Tiktok stars in India and here we provide you with the top 10 TikTok Stars.

One of the most famous TikTok stars, Mr. Faisu holds a great fan following on TikTok and Instagram. Mr Faisu real is Shaikh Mudassir Faisal in the real world. He is the part and leader of the most famous group Team 07. His account was suspended from TikTok due to some controversies and he lost his verification badge. He garnered over 32.2 million fans on his TikTok account which help him in building up a massive following and he is not only famous as one of the TikTok stars in India but also on other social media channels like Instagram where he has over 20 million followers as of now, which are a very great achievement.

One of the most popular TikTok stars in India, Riyaz is the fastest user of TikTok to reach 10 million and 25 million followers. From a comedian to the most popular Tik Tok stars his journey is wonderful and full of joy. He is Indian by nationality, but surprisingly he lives in Bhutan and now shifted to Mumbai. He is very popular among his followers for his lip-syncs, dancing, humor videos, and for his hairstyle. He has 43.9 million fans on TikTok and 2.1 billion hearts on TikTok and also has 12 million followers on Instagram.

Jannat Zubair is the most popular TikTok user in India with 28.6 million fans on TikTok. Apart from a TikToker, she is an Indian film and television actress who started her career in 2009 but gained recognition through Colors TV’s Phulwa in 2011. She casted in a very popular song” Zindagi di paudi” and also played the role of Natasha in the movie ‘Hichki’. She is best known for her dancing videos on TikTok that’s why she holds the third position on the list of tik tok stars.

Arishfa Khan is a Television Actress, the best TikToker in India, and a Social Media star who holds 28.2 Million Followers and 1.1 billion hearts on her TikTok account. She gives fashion and beauty tips on her YouTube channel. She started her career as a young child actress in 2012 with the famous television show Ek Veer Ki Ardaas…Veera. She is best known for her Shayari-related videos, dancing, and lips-sync. She also appeared in the song Yaara with Manjul Khattar and also works in music videos with popular brands.

A rising TikTok star in India, Nisha Guragain is widely-known on TikTok for her famous acting and lip-syncs skills. She is fondly called by the name Angel Nishu which is her nickname. She is popular for her expression videos and has 28 million followers on TikTok and 756 million hearts. Apart from that, she also worked on two popular Punjabi songs Na Ladeya Kar and Jatta Ve Jatta.

The Founder and Director of the company Ace Production, Awez Darbar is a Choreographer and dancer as well as an India TikTok representative. He is a member of the 26 million follower club on the app and also has 1.1 billion hearts on his videos. He rose to fame after his Tiktok collaborations with many famous Bollywood celebrities like Ritesh Deshmukh, Sara Ali Khan, Priyanka Chopra, and many more. He posted a mix of comedy and lip-sync videos but he earned the dance and talent badge on TikTok. He owned a dance academy BYOU in Mumbai India alongside his brother. He posts his dance videos on his own YouTube channel named Awez Darbar which has over 3 million subscribers.

A professional model and TV actress, Sameeksha Sud is famous for comedy video clips, and dance videos and performs lip-syncs on TikTok. She has 24.5 million followers and 1.2 billion hearts on her TikTok account. She has appeared in many TV Shows like Bal Veer and Ek Aastha Aisi Bhi but gained popularity with her comedy and entertaining videos. She is also famous on social media for making videos and keeping her fans entertained. She is a member of the three-member famous TikTok group ‘Teentigada’ which comprises Vishal and Bhavin whom she met at an event organized by TikTok.