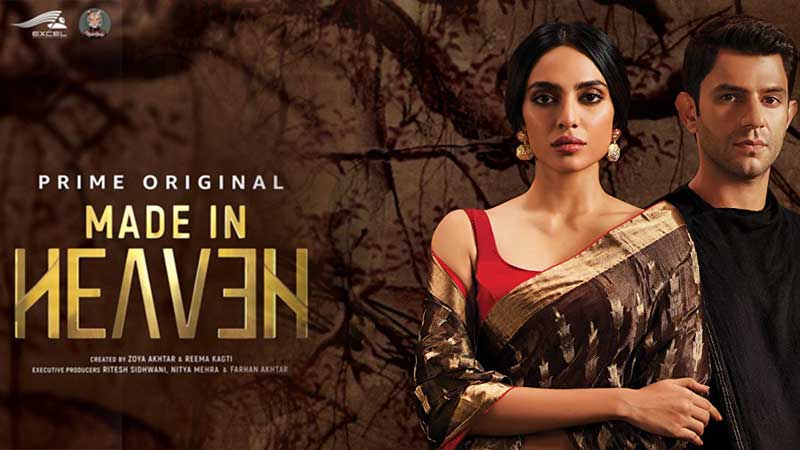 The webspace was growing at its own pace, but in 2020, when the pandemic hit all of us, OTT platforms witnessed an immense jump in their popularity. At the same time, we saw a downfall for movies as shootings were put to halt, only content made from home kept the entertainment industry alive; this event made people think out of the box and create something with limited resources or people they have around them. At the same time, we saw a lot of web series hitting the OTT platforms one after another and a lot of them were loved by the audience; here you will find information about one such top Indian web series that is worth watching if you haven’t already watched it.

Made in Heaven Season 1- An Overview

‘Made in Heaven’ was released in 2019 when fewer of us were introduced to the fascinating world of web series. The series has been loosely inspired by films like Monsoon Wedding and Band Baaja Baraat as it has been set against the backdrop of the wedding business in India. Amazon Prime Video’s Original Series Made in Heaven is the story of two young wedding planners, Tara and Karan. Their eponymous wedding planning company based in Delhi organizes high-profile weddings in the city. The story puts a light on the value system of the moneyed, urban, and supposedly liberal India and this 9-episodes web series are entertaining yet thought-provoking. So, if big fat Indian weddings have always fascinated you, this web series is going to be an eye-opener as it unmasks the shiny lies of rich Indian weddings. ‘Made in Heaven’ has a lot of strong performances and was critically acclaimed by the audience, probably that’s why the makers already started shooting in April 2020 for ‘Made in Heaven Season 2’, however, that was soon stopped due to the COVID-19 situation. As per the reports, the filming is over and season 2 will release soon.

Where to Watch All the Episodes of Made in Heaven Season 1?

Cast and Crew of Made in Heaven Season 1

Here are the details of the lead cast and crew of Made in Heaven Season 1:

Can You Download All Episodes of Made in Heaven Season 1 for Free?

Made in Heaven was released as an Amazon Prime Video Original; hence is available to watch there. You can download or watch all the episodes of Made in Heaven Season 1 on Amazon Prime but not for free. You have to buy a subscription that starts at just Rs. 129 per month. Amazon Prime offers the most inexpensive subscription and with that, you get access to unlimited entertainment. From movies, web series to TV shows, Amazon Prime has at least something for everyone.

If you are looking for ways to watch or download the episodes of Season 1 of Made in Heaven web series for free, then there are some torrent sites like moviesda, gomovies, tamilrockers, yify, etc., that are offering the episodes for free. These sites are involved in leaking pirated copies of movies and web series on their platform for free; piracy is a criminal offense and in India, any person who is involved in piracy acts or infringing copyright is subject to a jail term including monetary charges. Hence, it is always recommended to use legal easy-to-watch any copyright-protected content to avoid getting into any legal trouble.