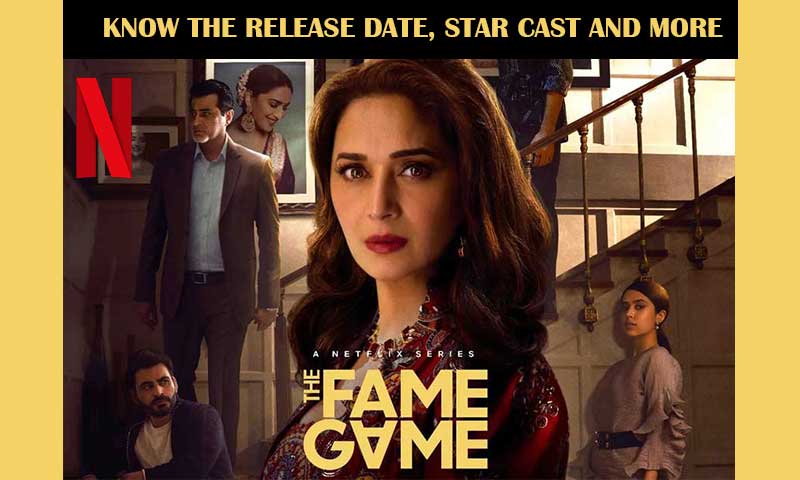 ‘Dhak Dhak girl’ Madhuri Dixit is all set to make her comeback with her debut web series ‘The Fame Game’ that was previously titled ‘Finding Anamika’. Karan Johar, the producer of the series, took to Twitter to announce the change in the title, the release date and also shared the new poster of the series.

On Twitter, Karan Johar wrote while sharing the poster, “There is always a hidden truth behind the curtain of fame and stardom. What is this truth in the life of Bollywood’s biggest star Anamika Anand? Know more soon. ‘The Fame Game’ series premieres 25th February, only on Netflix! #TheFameGame.”

The poster has Madhuri in the centre with an intense look while Sanjay Kapoor, Manav Kaul, Lakshvir Saran and Muskkaan Jaferi are also a part of the poster.

What to Expect with ‘The Fame Game’?

Madhuri Dixit is all geared up for her digital debut with Karan Johar’s Dharamatic Entertainment; the teaser of the series was released in September last year; have a look at the official teaser released by Netflix:

‘The Fame Game’ stars Madhuri Dixit alongside Sanjay Kapoor in the lead and the story revolves around Anamika Anand, played by Madhuri, who is a Bollywood icon and lives a perfect life, but the question is, “Is her life perfect or a perfectly crafted facade? The series was earlier titled ‘Finding Anamika’. The series seems to be a rollercoaster ride showing the highs and lows of the actress’s life and will also reveal some hidden truths and painful lies.

With ‘The Fame Game’, Sanjay Kapoor and Madhuri Dixit will be seen sharing the screen together after almost two decades; they last shared screen space in 1997’s Mohabbat and how someone can forget their sizzling chemistry in the 90s hit Raja. The series also brings together Sri Rao as the showrunner and writer and Bejoy Nambiar and Karishma Kohli as directors.

Where and When ‘The Fame Game’ will Start Streaming?

Directed by Bejoy Nambiar and Karishma Kohli, ‘The Fame Game’ web series starts streaming on Netflix from February 25, 2022, as announced by Karan Johar on Twitter. The series is said to have 8 episodes that will be released on the same day.

If you are already excited to watch the series ‘The Fame Game’, here is the link to it; you can watch it as soon as all the episodes get uploaded on the release date:

Cast and Crew of ‘The Fame Game’

Here is the information about the cast and crew involved in ‘The Fame Game’ web series: