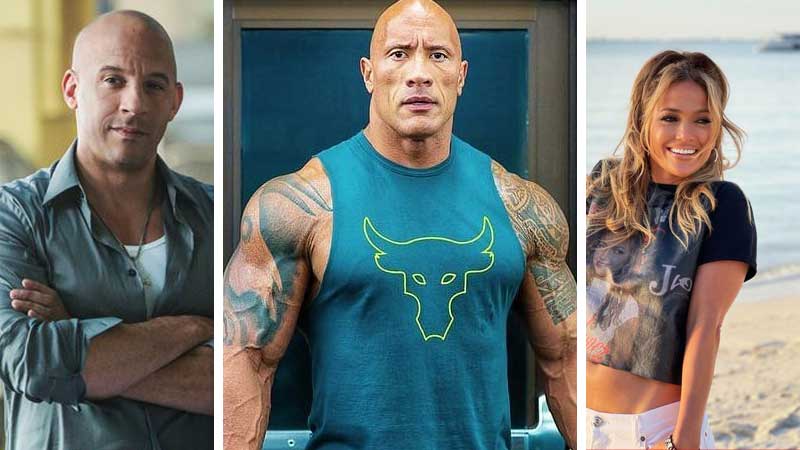 Social media has made it feasible to follow your favorite star and get a closer look at their personal life. These stars built their online presence through the movies they work in or due to the headlines they make and that’s why you see a lot of difference in their fan following on their social media handles.

Keeping in mind the curiosity fans have for their favorite actors, we have decided to pen down the list of most popular actors on social media.

Let’s see which celebrities are on the top of their social media game:

Dwayne Johnson popularly known as ‘The Rock’ tops the list of the most popular social media celebs. One-time wrestler and current big-screen phenom, Dwayne Johnson has several movies heading to the theatre in the near future and had given numerous hits in the past. He even went on to become the most followed American man on Instagram. The Rock really has a lot that’s cooking.

J-Lo is a well-known actress, singer, dancer, fashion designer, author & producer, and that’s the reason she has successfully built her huge fan base online. Jennifer Lopez started her acting career as a teenager and over the years performed a variety of roles before she turned to become a singer and released her first album in 1999. Her singing got her recognition among the public, making her very famous.

Priyanka Chopra is the proud winner of the Miss World 2000 pageant. A prominent Indian actress, singer, and film producer, Priyanka even got her name in the list of highest-paid Bollywood celebrities. There was a substantial increase in her popularity after her marriage with American singer Nick Jonas. She is not only known for her performances in movies but is also known for her active involvement in various social causes and programs.

Next on the list of most popular social media stars is Zac Efron who rose to fame as a teen heart-throb in the High School Musical franchise of Disney. After that, he got to be a part of several big-budget Hollywood movies. His performance as Troy Bolton in High School Musical 2 (2007) broke cable TV records with 17.5 million viewers.

A Canadian model, actress, entrepreneur, and author, Shay Mitchell got all the honor and fame for her performance as Emily Fields in the series “Pretty Little Liars”. Shay loves to stay in touch with her fans through her YouTube channel where she creates varieties of videos. She is a humanitarian plus she uses her social media channels for women empowerment.

Hugh Jackman got so much popular among the public after his performance as superhero Wolverine in the X-Men film series. An Australian actor, singer, and producer from Sydney, Jackman even holds the Guinness World Record for “longest career as a live-action Marvel superhero” for playing Wolverine in the X-Men film series from 2000 to 2018. Apart from that, he is also known for his stage work.

Kevin Hart has earned a reputation as a global comedian due to his starring roles in the hit movies, Ride Along, Grudge Match, Get Hard, and Central Intelligence. However, he got a major hike in his fan following after his 2011 comedy special “Laugh at My Pain”. This led to an increase in his social media fan following and got him the title of the year’s top comedian on Ticketmaster (the dominant global ticketing agency).

Professionally known as Lucy Hale, Karen Lucille Hale is an American actress, singer, and television personality. She was introduced to fame after her performances as Becca Sommers in the series Bionic Woman and Rose Baker in the series Privileged. She is the one celeb who drove 5M fans to her Instagram account after showing off her temporary pixie haircut.

Ashley Benson rose to fame with her debut performance as Hanna Marin in the TV series Pretty Little Liars. Model and actress by profession, Ashley even starred in the crime thriller Spring Breakers that got her a huge 21.4M followers on Instagram. Before reaching the heights of success, she even performed small parts in iconic films and TV series.