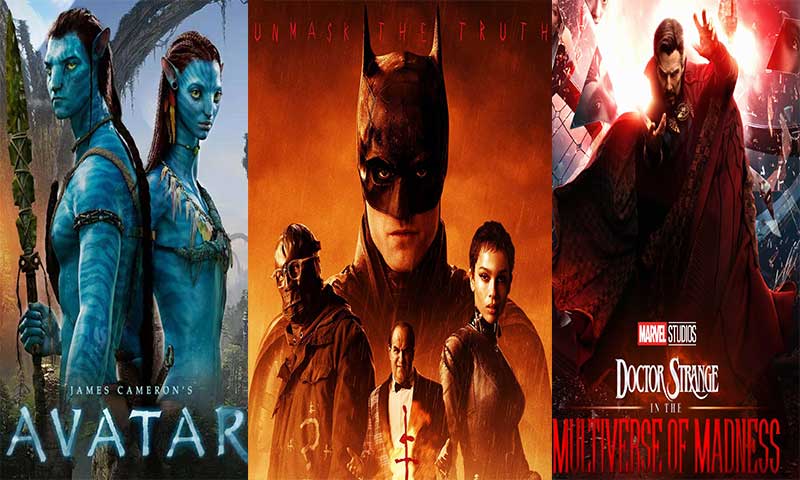 Of course, you do.

Then, you must be excited about the most anticipated movies of 2022.

Even if you don’t watch them in theatres, you can download them after a few days of their release from The Pirate Bay.

Let’s find out more about them here.

Some movies don’t generate a lot of hype but do well at the box office and some do the exact opposite. We don’t know how well these movies do in theatres, but we have made the list of the most anticipated movies of 2022 here:

It’s been almost 13 years since the first movie Avatar was released and made us all fall in love with James Cameron’s picturesque storytelling yet captivating narrative.

That’s why Avatar 2 is creating the same hype among its fans.

The impressive cast ensemble of Sam Worthington, Kate Winslet, and Sigourney Weaver will be enough to mesmerize the audience.

Even though the sequel has long been anticipated, it will have a blockbuster release this year.

This movie is literally knocking on our doors, and we can’t hold our horses anymore to see Robert Pattinson killing the role of Batman.

But, combined with his hotness comes his acting skill and the fiery rage of the DC superhero.

The storyline is more captivating than what we’ve heard through rumors so you better tighten those seatbelts if you want to watch this movie.

3: Doctor Strange in the Multiverse of Madness

If DC is setting the stage on fire with his Batman release, how can MCU lag behind?

The Multiverse of Madness storyline was already initiated in SpiderMan: No Way Home because Peter’s whimsical mind has opened a whole universe of altering dimensions.

Now, Doctor Strange has to bear the cross since he was the one helping Peter all along.

The film will have a more tantalizing appearance of MCU cameos but you can expect a lot more than the film than other Marvel blockbusters.

Since Chadwick Boseman died in 2020, making this movie has been a little tough for the director.

But, if anyone can pull this off, it’s Ryan Coogler.

Even though the movie will bring many bittersweet memories of Boseman, we are sure it will be worth the watch.

Val Kilmer and Tom Cruise are coming back once again after 35 years because the prequel of this movie came out that long ago.

Even though the shooting was finished in 2019, the pandemic has forced to push the movie’s release many times.

However, Cruise is extremely happy that the movie will get a theatrical release in 2022, and so are we!!!

Do you think Thor: Ragnarok was one of the most imaginative and distinctive films in the MCU?

Things are about to change this year.

Thor’s new sequel will include Christian Bale and the Guardians of the Galaxy cast besides Chris Hemsworth, so that’s something to look forward to.

7: The Worst Person in the World

Joachim Trier’s fifth film has made us awestruck, and we can’t complain about it.

This is a romantic drama that tells the story of Julie, a woman of 30 years old.

She shares a passionate relationship with Aksel but is emotionally unfulfilled. This movie is worth watching if you want to view life from a new perspective this year.

8: The Unbearable Weight of Massive Talent

Nicolas Cage does not need an introduction, which is why he is our favorite.

The cult legend is paired with GOT legend Pedro Pascal, and what more can you expect from this dynamic duo than a brilliant performance?

You will see Cage’s real-life struggle with stardom in this film, and we can’t wait any longer.

Olivia Wilde is trying out her hands in a psychological thriller, which is why Don’t Worry Darling is all set to generate buzz in the audience.

It is not a domestic potboiler, even though the central character revolves around an unhappy housewife.

Even though we don’t know more details of this film, you can always expect a bang!

As the rumors say, this comedy film will make us all laugh vigorously in the theatres.

Rex is an adult entertainer forced to come back home where he meets Strawberry, ready to escape to L.A. with the dream of a promising future.

He is a gargantuan prick, but we like him, and that’s why this movie is so anticipated this year.

We have created the list of the most anticipated movies of 2022, and you cannot miss even one of them because they will be a bang.

Or further information, you can ping us in the comment section. We will come back with an answer in no time.