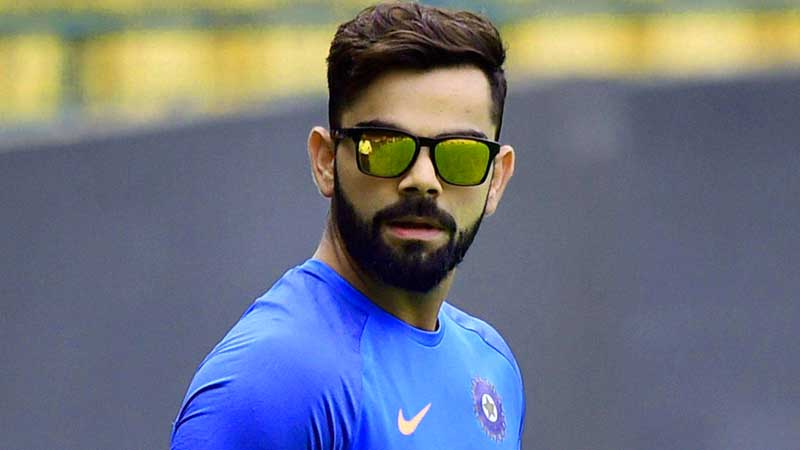 Cricket is a popular sport in India, and it is played almost everywhere. But in India, it is more than a religion and cricketers are worshiped as a God here.

From Kapil Dev to Sachin Tendulkar, Indian cricket produced some of the greatest players. Now, this legacy is followed up with the latest Indian cricket sensation Virat Kohli.

Virat Kohli is the captain of the Indian cricket team in all formats. He is known as the Run Machine and King Kohli in International cricket. He is probably one of the greatest and most consistent batsmen in modern-day cricket.

From a simple middle-class boy in Delhi to becoming the Indian cricket sensation, the journey of Virat Kohli is marvelous. Let’s have a glimpse of Run Machine Virat Kohli’s life with this biography.

Virat Kohl was born on 5th November 1988 to Prem Kohli and Saroj Kohli in Delhi. His father was a criminal lawyer by profession and his mother is a simple housewife.  He is the youngest one in three children.

He did schooling from Vishal Bharti Public School. His interest in cricket was developed since childhood at the age of three. At the age of 9, he was enrolled in West Delhi Cricket Academy where he was trained under the Raj Kumar Sharma. He was trained among the 250 other kids. But his talent easily got the eyeballs of his coach.

In 2002, he started playing for the Delhi Under-15 team and become the leading run-scorer in the 2002–03 Polly Umrigar Trophy competition. Next year, he was appointed as a captain of the team for the same tournament.

In 2003-04 he was selected in the Delhi Under-17 team for Vijay Merchant Trophy where he scored 470 runs in just four matches with the incredible average of 117.50 includes two massive hundreds. With the help of this phenomenal performance, Delhi managed to lift the Vijay Merchant Trophy for multiple years.

Soon he got selected for the under -19 Indian cricket team for the 2006 England tour, where Virat managed to score runs with an average of 105 in three ODI match series.

In 2008, under his captainship India won the Under-19 ICC world cup, it was a great achievement for the Virat. His attitude, temperament, and aggregation grabbed the attention of Cricket pandits and selectors.  Later he got selected in IPL for Royal Challengers Bangalore.

He made his debut in 2008 with India and Sri Lanka ODI series and the rest is history. He performed consistently and made a permanent place in the Indian team.

His performances, attitude and mental strength made him a backbone of the Indian batting team. He was titled as the “Chase Master” due to his ability to perform under tremendous pressure. He has scored runs with an average of 98.93 in successful run chases.

He made his Test debut in 2011 against West Indies, now he is the captain of the Indian test team.

The above stats of King Kohli shows why he is the undisputed king of Cricket.

The list of achievements is very long and he is still breaking the records with his bat. Here we have collected the greatest achievements of The Run Machine Kohli.

Cricket and Bollywood are the two glamorous industries in India. Hence, it’s impossible to keep them apart from each other. The connection between Bollywood and Cricket has been famous from the beginning. The affairs between Cricketers and Bollywood actresses gained so many hypes. Virat Kohli is also linked up with many actresses but he ended up all the rumors by marrying to Anushka Sharma in 2017. Here is the list of beauties who linked up with Indian Captain.

Sakshi is a Tamil film actress and linked up with the Virat Kohli in his early career.

Sarah-Jane-Dias is an Indian actress. She met Virat Kohli at a party and started dating each other and later they broke up.

This Brazilian model has appeared in a few movies such as Talaash and Purani Jeans. She confessed that she was dating Virat Kohli for two years.

Tammanah Bhatia is one of the most famous names in the Telugu industry and also appeared in few Bollywood ventures. Virat Kohli and Tamannaah Bhatia were rumored to be in a relationship. They came close after shooting an advertisement together.

The journey of becoming Virushka from Virat Kohli to Anushka Sharma began in 2013 when they met for a TV commercial. Soon they become friends and started dating each other. After dating for nearly 4 years they got married in December 2017 in Italy.

Virat Kohli is the most successful Indian celebrity in the endorsement world, he recently surpassed the King Khan of Bollywood Shah Rukh Khan in the list of top Indian celebrity endorser. As per Forbes, the brand value of Virat Kohli is $14.5 million, which is higher than that of football icon Lionel Messi, golf superstar Rory McIlroy and Golden State Warriors’ Stephen Curry. Virat has over 17 brands in his bucket list and still counting. Here is the list of brands Virat Kohli endorses.

Net Worth of Virat Kohli

Net Worth is around 900 Crore.

Virat is active on social media and has more than millions of followers. See the below table of Virat Kohli followers.

Virat Kohli is not only a modern-day legend in cricket, but also a great human being. His journey till now has been extraordinary.

Bollywood buff, aspiring journalist, loves to write about Bollywood celebs, their lifestyle and the truth behind controversies. I always look up the latest Bollywood news and offer it to my readers.