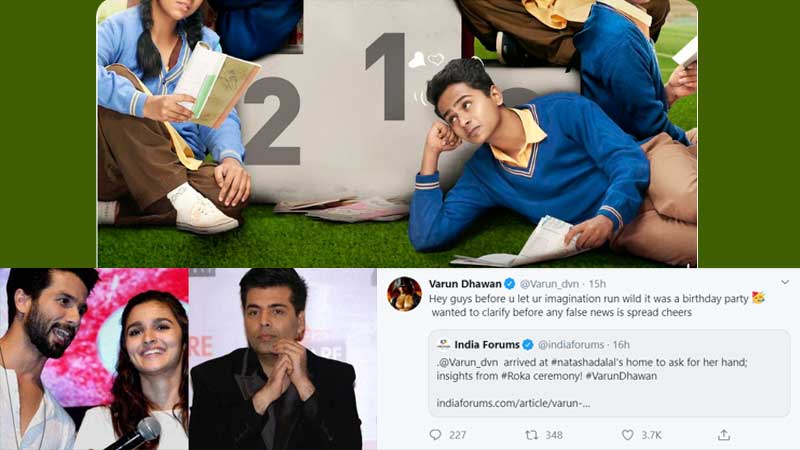 Angrezi Medium trailer is out starring Irrfan Khan, Kareena Kapoor Khan, Radhika Madan, Deepak Dobriyal and Dimple Kapadia in lead roles. Ever since the film was announced, fans’ excitement was at peak. The trailer has met the expectations and the story goes all the way long from Udaipur to London. After Hindi Medium, Irrfan and Deepak Dobriyal will be reuniting in Angrezi Medium. Irrfan plays the father of Radhika and Kareena will be seen as a cop in the movie.

Rumors of Varun Dhawan and Natasha Dalal’s wedding have been talk of the town for quite a long time. They were expected to tie the knot in December 2019 and this time everyone is talking about their summer wedding in Thailand. Last night, Varun’s closed ones and industry friends were spotted outside Natasha’s house and the speculation was that Roka ceremony was being performed for the couple at Natasha’s house. Karan Johar, Manish Malhotra, and even Varun were spotted exiting the house with a faded red spot on his forehead, possibly a ‘teeka’. Varun’s mother was clicked carrying a bag on which it was written ‘Thank You for being here today. Looking forward to celebrate with you! Warm Regards, Natasha and Raju Dalal’.

Despite all this, Varun clearly refused the reports of his Roka ceremony with Natasha in a tweet to put a full stop to all the prevailing imaginations.

The film is supposed to show some performance on Valentine’s Day but still it has to compete with Kartik Aryan and Sara Ali Khan starring ‘Love Aaj Kal’.

Last seen sharing space in Vikas Bahl’s ‘Shandaar’, Shahid Kapoor and Alia Bhatt are set to reappear with their Jodi in Karan Johar’s patriotic project. However, Shahid has already said yes to the movie and Alia’s response is being awaited. They were last seen together in Vikas Bahl’s Shandaar that turned out to be a blunder at the box office. Maybe this time they will turn their luck for good.

Rajkumar Rao and Nushrat Bharucha starrer ‘Chhalaang’ set to be released on 31st Jan 2020 will now the hit screens on 12th June 2020. The makers have shared another poster with a new release date. The movie was earlier titled ‘Turram Khan’ now changed to ‘Chhalaang’. The film poster shows confused actors as to when should their child play and when they should study.