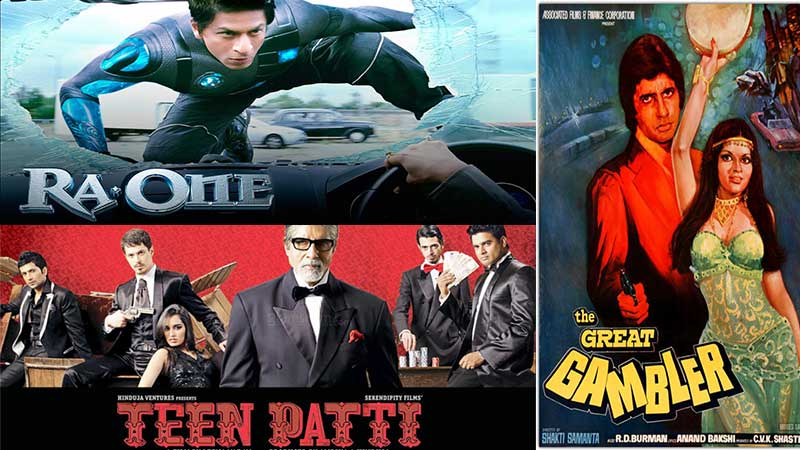 In the Bollywood industry, no subject is off topics when it comes to making movies. For over a century, Bollywood has been entertaining Indians and people across the globe with vibrant song and dance routines about everything from romantic love to the Indian education system.

Did you know, however, that there have been numerous Bollywood movies made throughout the years that are totally dedicated to gaming? From little-known movies through to global blockbusters, our industry has created some incredible films over the decades that have been inspired by games as diverse as superhero video games through to casino favorites.

In this article, we’ll be looking at five of the best Bollywood movies with gaming at their core.

With its all-star cast of Amitabh Bachchan, Ben Kingsley, Raima Sen, Madhavan, as well as being the debut filk of Shraddha Kapoor, audiences knew they’d be in for a treat with 2010’s Teen Patti from the moment the film was announced.

Featuring the immensely popular Indian card variant of three-card brag, Teen Patti centers around Bachchan’s Venkat Subramaniam, a professor of mathematics and software engineering and an all-round genius who becomes obsessed with proving a theory on probability, one which eventually gets him embroiled in the world of unregulated online casino gaming.

The second of Bachchan’s movies to star in this list, in this classic 1979 movie, he’s supported by Zeenat Aman and Neetu Singh. Bachchan portrays Jai, a professional gamer who soon draws the eye of some rather unsavory characters.

Whether he’s participating in the complex and challenging casino classic, blackjack, or trying his hand at roulette, Jai just can’t seem to lose a game. This prodigious talent soon makes him the target of powerful leaders in the underworld, who want to use Jai’s skills for their own gain.

One of the most bizarre films on this list, India’s first-ever Zom-Com features a car that was selected from an audition. The Volkswagen Polo that’s used throughout the film was cast through the My Car Superstar! the audition that was held in association with Volkswagen India.

The plot of the film, as you might’ve guessed by its nom de plume, includes romance, comedy, and lashings of zombie apocalypse action. Inspired by the 2011 video game Dead Island, Go Goa Gone features Saif Ali Jhan, Kunal Khemu, and Vir Das as a group of friends who visit a remote island for a night of partying. The next morning, however, they awake to find themselves surrounded by the living dead.

Starring the king of Bollywood himself, Shah Rukh Khan, this superhero movie was the first of its kind in Bollywood. Wanting the film to be a major hit, before its official release in October 2011, Shah Rukh ensured that it was first immortalized on the small screen in the form of a video game.

RA.ONE – The Game was released in September 2011 and acted as a prequel to the movie itself. Not only was this a major innovation for the Bollywood industry, but it also cemented a hugely lucrative partnership between Sony Computer Entertainment Europe and the Ra.One movie franchise. The game was compatible with the PS2 and PS3 consoles that were popular at the beginning of the last decade and was proof of just how much of a commercial success a Bollywood movie could be.

The film, which also stars Kareen Kapoor and Arjun Rampal, follows the story of Shekha Subramanium, played by Khan. A game designer, Shekhar builds a first-of-its-kind motion sensor game that features a protagonist – Ra.One – who is actually more powerful than the protagonist (G.One).

Although this makes for a thrilling game to play, things go terribly wrong pretty quickly when Ra One escapes the game and begins to pursue Shekhar’s son. With no choice but to bring G.One from the virtual world, Shekhar is in for the ride of his life as he goes to great lengths to protect his loved ones.