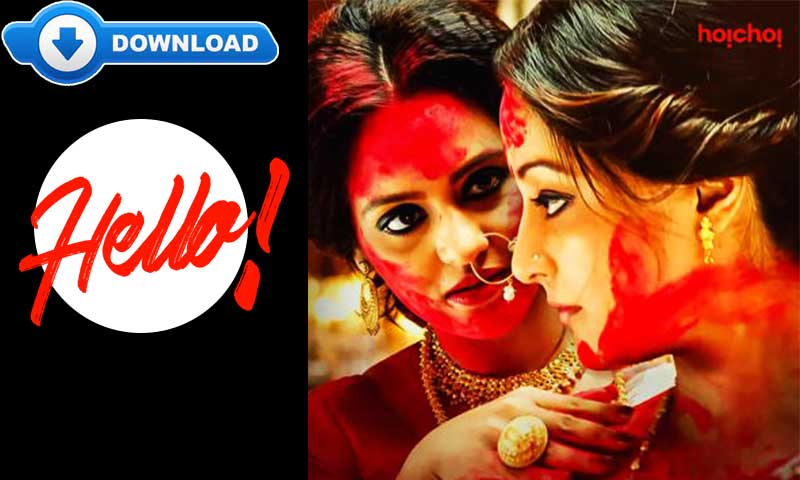 Are you ready to watch something excitingly romantic, but at the same time pinched with suspense, secrets, and mysteries?

The entangled stories are already interesting and it’s even more interesting to untangle the knots by watching the complete series, that too for free.

If so, then you must watch this Bengali dubbed Hindi series, titled Hello, that was released in 2017. This set of episodes is a three-season series that decodes all the unwanted activities taking place under the name of love and lust. Watch this series to unfold the hidden secrets of manipulation under the covers of love marriage. Hello, as the title says, is about a love triangle, whose storyline, plot, and climax have been running in demand for quite some time, impressing and tempting the audience to have a look.

What goes around, comes around!

Hello, as the title says, is about what happens after a married woman receives an unknown phone call. The episodes unfold the lives of three characters when Nandita receives an MMS, in which her husband, named Ananyo is making love with Nina. This incident changed their lives upside down, just after one phone call. These three characters get caught up in a triangle that is hard to resist or leave. To know about what happened further in the gameplay, or whose fault it was, actually, you will have to be tuned in to continue to watch all the seasons with all the episodes.

The series is filled with mysterious secrets, and the songs like- Bodhu Kon Aalo, Amar Angle Angle Ke adds a cherry on the top.

To know all about the gameplay, which will help you to tackle the plot of what happens to these three characters, watch Hello, the web series right now.

Where to Watch All the Episodes of Hello Season 1?

Now, you do not need to pay a penny to watch the episodes of the Hello Series. You can watch all three seasons of eight episodes or more, that too for free, on MXPlayer. All the exciting episodes will take 20-30 minutes so, you can enjoy watching all the three seasons, that too in less time.

Let’s have a look at all the episodes of Hello Season 1 before you plan on deciding to watch the Series.

Cast and Crew of Hello Season 1

Here are the details of the lead cast and crew of Hello Season 1:

Can You Download All Episodes of Hello Season 1 for Free?

You can watch or download all the episodes of Hello, Season 1 web series, for free on MX Player. You don’t need to buy a subscription if you want to enjoy watching the complete web series.

Although the “Hello” series is also available on torrent sites like Filmyzilla, Filmygod, 123MKV, Movierulz, 1337x, YTS, etc., that is not legal as these sites provide pirated copies of the recently released movies and series. They do not have the copyright to the content that has been hosted on their websites.  They are often participating and promoting activities regarding privacy, which is considered a criminal offense and illegal in India. As a result of the copyright protection law, whoever is found involved in downloading copyright-protected content illegally or if someone is caught promoting piracy in any form or manner can be sent to jail; he/she can also be charged with a fair fine as per the degree of the violation of the law.

The torrent sites are offering free download links for the most popular and 5 star rated movies and web series, but it is an illegal activity with a risk factor. It is usually not considered a safe option to download from these third-party websites, as it might end up piling your devices with malicious and suspicious links, clicking on which can direct you to a spam website.

So, avoid using third-party websites for free downloads, try to use the official links and also avoid entering any personal information on any website links.

It is a piece of free advice, take it or leave it!