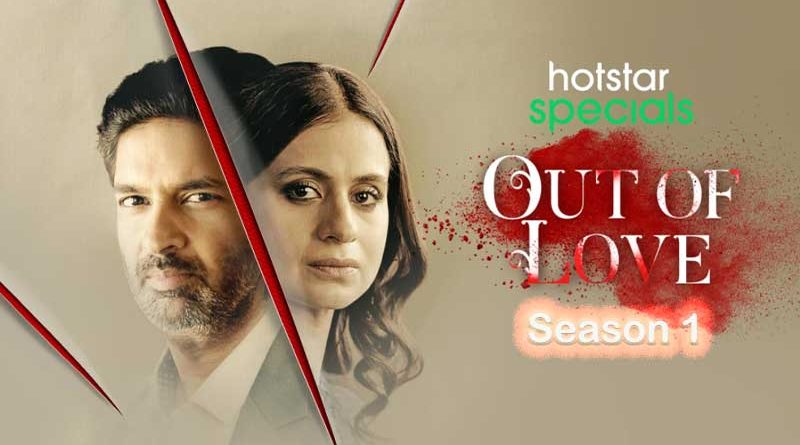 Drama and thriller together in the same series calls for a great combo, and this is what Season 1 of ‘Out of Love’ brings to you. The series is all about engaging drama of love and other affairs. It offers a modern view of marriage and how an independent, urban Indian woman goes on living her life when she finds out her husband is cheating. The writing creates enough ambience of tension throughout the series, and the crux of the story is quite simple. The performances given by Rasika Duggal and Purab Kohli as the main leads are terrific and that is what makes ‘Out of Love’ Season 1 a must-watch.

Out of Love Season 1- An Overview

Based on Doctor Foster by Mike Bartlett, Out of Love is an Indian series that has been released by Hotstar under Hotstar Originals.

Meera and Akarsh can be seen in a happy marriage until one day Meera finds a hair on Akarsh’s scarf. Meera gets worried and w

ants to know who Akarsh is secretly dating. She reveals all this to a friend, who asks her to behave normally around Akarsh to find out more evidence. The series revolves around how Meera exposes Akarsh’s relationship with a much younger woman, Alia and how she manages her marriage then.

Where to Watch All the Episodes of Out of Love Season 1?

Cast and Crew of Out of Love Season 1

Here are the details of the lead cast and crew of Out of Love Season 1:

Can You Download All Episodes of Out of Love Season 1 for Free?

To watch all the episodes online of Season 1 of Out of Love or download them to watch later, Disney+ Hotstar is the only option. You can watch the first episode of the ‘Out of Love’ web series for free, but to watch the full web series, you will need to buy a subscription to Disney+ Hotstar. The full Season 1 of ‘Out of Love’ is not available to watch or download for free except on some torrent sites like Filmygod, 123MKV, Movierulz, 1337x, YTS, etc., where it has been leaked online even before its release. These torrent sites offer pirated copies of the latest movies and web series even before their official release, and this affects the revenue of the moviemakers. The government of India has made several efforts to put a complete ban on piracy, however, they have not been successful in doing so till date as there are a lot of torrent sites and their proxy sites are available on the internet; moreover, everyday numerous new websites are created for the purpose of leaking movies and web series online for monetary profit.

However, as per the law, piracy is considered a criminal offense and anyone who is involved in downloading, uploading or circulating pirate copies of movies or any other copyright-protected content can be sent to jail for 3 years along with fine that can go up to Rs. 10 lakhs.