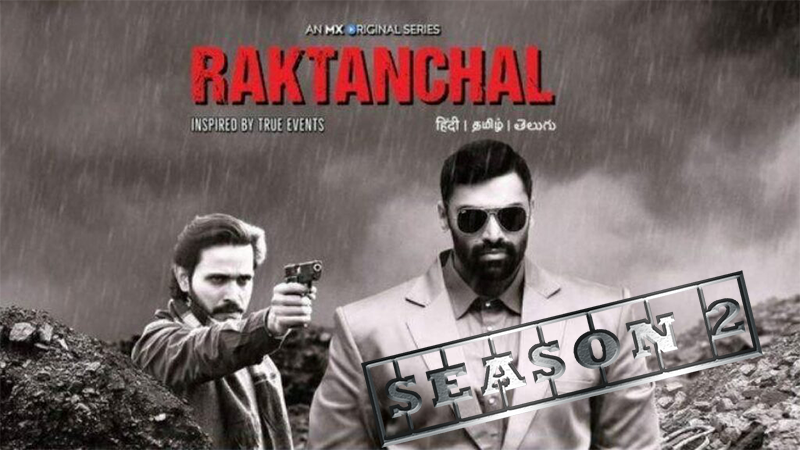 MX Player surely has a good collection of web series; series like ‘Raktanchal’ make people wait for the release of the second instalment. Raktanchal Season 1 was released back in 2020 and now is the time to relive the thrill and entertainment. Directed by Ritam Srivastav, Raktanchal is the latest web series that talks about the situation of crime in Purvanchal in the 1980s.

If you are interested in watching an action-packed crime drama, do not miss the real-life events inspired series Raktanchal.

Raktanchal Season 2 is in the continuation of Season 1; the series is a set of episodes that are inspired by real-life events from the ’80s of Purvanchal, Uttar Pradesh; the time when the state development work was distributed through tenders.

The empire of criminal Waseem Khan, the tender mafia is challenged by a young criminal Vijay Singh. Waseem Khan is a pure criminal, however, Vijay is a good man driven by vengeance, who tries to serve people as much as he can even after turning into an anti-hero. The story shows a clash for getting tenders with a political battle, which unleashes a bloodbath in the city of Purvanchal. Vijay has to crush personal odds to beat Waseem Khan and become the tender king.

Where to Watch All the Episodes of Raktanchal Season 2?

Here are the links to download or watch all the episodes online of Season 2 of ‘Raktanchal’ web series; you can watch the first episode for free:

Cast and Crew of Raktanchal Season 2

Here are the details of the lead cast and crew of Raktanchal Season 2:

Can You Download All Episodes of Raktanchal Season 2 for Free?

You can watch or download all the episodes of ‘Raktanchal’ Season 2 online from MX Player that too for free. Yes, you read it right. The series is available for free and you do not have to pay any charges to watch the episodes. Hence, there is no need to download the pirated version of the ‘Raktanchal’ series from torrent platforms like Filmyzilla, Filmygod, 123MKV, Movierulz, 1337x, YTS, etc.; as this is not legal. These websites host leaked or pirated versions of popular movies, TV shows and series illegally; they do not own the copyrights to the same, hence, are promoting piracy and can get banned anytime if traced by the government.

Moreover, as per the law, piracy is a criminal offence and is punishable too, therefore, if anyone is found guilty of being involved in promoting piracy in any form or manner can be sent to jail and will be penalised a heavy fine. Apart from that, these websites are not safe to browse as they are full of suspicious and malicious links, hence, can put your personal information at risk.

Disclaimer-We do not promote or endorse websites offering pirated content and the illegal ways of downloading or watching movies, TV shows, and so on. The information available here is just to make readers aware of the illegal websites on the internet. The readers are always advised to go for legal ways to watch the copyright-protected content.