Entertainment » Top 10 » Top 21 Richest Actors in the World; Their Net Worth will Blow Your Mind

Top 21 Richest Actors in the World; Their Net Worth will Blow Your Mind 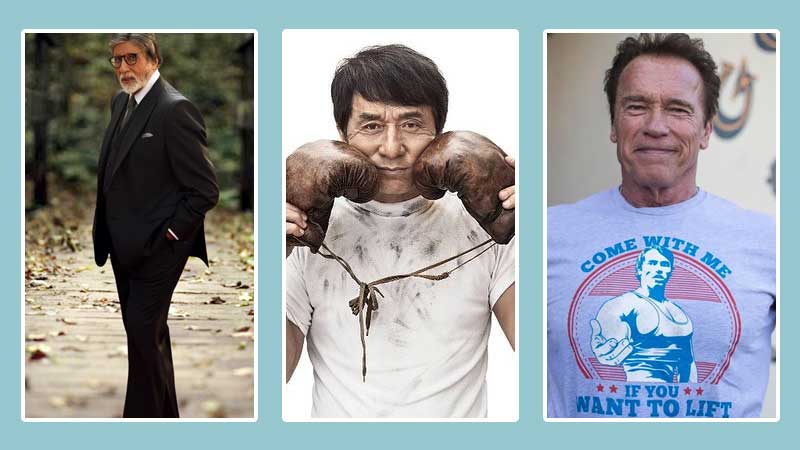 Actors are known for their luxurious bungalows, high-end cars, and lavish lifestyle, all due to the hefty paycheck they receive for their work. Definitely, they make a fortune out of their jobs and their extravagant lifestyle shows that they earn a lot to afford all that are just dreams for the public.

An American actress and investor, Jami Gertz is known for her performances in movies like Twister, Crossroads, Less Than Zero, The Lost Boys, and Quicksilver. Even though she has fewer achievements in her name when it comes to success, the reason for her net worth being so high is that Jami is a part-owner of the NBA team, Atlanta Hawks along with her husband.

As of 2021, the estimated net worth of Jami Gertz is $3 billion out of which the major chunk is derived from her marriage to LA-based billionaire Tony Ressler who is the co-founder of Ares Management with over $136 billion worth of assets.

In 2011, Tyler Perry who is an Afro-American actor, writer, producer, and director, was listed as the highest-paid man by Forbes. Known for his performance as ‘Madea’ an elderly woman, Tyler is known for some of his best roles that include ‘Daddy’s Little Girl’ (2007), ‘Why Did I Get Married?’ (2007) and ‘Diary of a Black Woman’(2002).

As of 2021, the estimated net worth of Tyler Perry is $1 billion making him one of the richest actors in the world; the major part of his earnings come from his acting projects, writing, and production.

Shahrukh is an actor of Indian origin who hails from New Delhi. Known as ‘King of Bollywood’, Shahrukh Khan is often called ‘King Khan’. He has worked in more than 80 films till now and has received a lot of awards for his amazing performances. Apart from that, he has even hosted a few reality shows and award shows.

As of 2021, the estimated net worth of Shahrukh Khan is $600 million and his primary source of income is acting; apart from that, he also gets heavy paychecks through endorsements and stage performances.

Tom Cruise is a well-known American producer and film actor from New York who was known for his stunts in movies. He has also given a lot of award-winning performances and is mainly recognized for his top movies that include-  ‘Mission Impossible series’, ‘Knight and Day’, ‘Minority Report’, ‘Top Gun’ and ‘Vanilla Sky’.

His cute looks have got him a lot of fan following; after doing a lot of movies, now he has shifted to production as well.

As of 2021, the estimated net worth of Tom Cruise is $570 million, and he makes most of his money from the box office cuts.

An American director and actor, George Clooney has won a lot of awards for his performances in Ocean’s Eleven, Three Kings, and Syriana and has also received two Academy Awards. He is known to be a part of the highest-grossing films that adds to his success rate and that’s why he is one richest actor with a huge net worth.

As of 2021, the estimated net worth of George Clooney is $500 million; George’s tequila business is the reason he is on the list of the richest actors and not due to acting as he has not done a single movie after 2016.

Robert De Niro got all the fame for his acting skills; some of his recent performances include ‘Meet the Fockers’, ‘Meet the Parents’, ‘The Intern’, and ‘Dirty Grandpa’ while some of his amazing performances from the past include ‘Goodfellas’, ‘The Godfather Part II’, ‘Analyze That’, ‘Casino’, and ‘Heat’.

As of 2021, the estimated net worth of Robert De Niro is $500 million and apart from acting, his income also comes from Nobu Hospitality and Tribeca Grill.

The American actor, director, producer, and screenwriter, Mel Gibson, is famous for his action hero roles. His top performances as an actor include The Passion of the Christ, We Were Soldiers, and Braveheart. In 1995, he even received an Academy Award and  Golden Globe Award.

As of 2021, the estimated net worth of Mel Gibson is $425 million. Apart from acting, he also makes money from the direction and production of films that got him a place in the list of the richest actors in the world.

An American actor and film producer, Adam Sandler, is one of the highest earners in Hollywood. One of his movies was the highest-grossing and that brought in $271 million at the box office. He is also popular for his comic roles and his top performances include ‘big Daddy’, ‘50 First Dates’, ‘Grown Ups’, ‘Just Go With It’ and ‘Hotel Transylvania franchise’.

As of 2021, the estimated net worth of Adam Sandler is $420 million that includes the income from his various ventures both in the film and music industry.

One of the biggest names of the Indian film industry, Amitabh Bachchan has been a part of more than 175 Bollywood films and even made his Hollywood debut at the age of 70 in ‘The Great Gatsby’ (2013). He has even hosted 7 seasons of the biggest Indian reality show ‘Kaun Banega Crorepati’.

As of 2021, the estimated net worth of Amitabh Bachchan is $400 million; the majority of his earnings are from Brand Endorsements. He is the brand ambassador for Polio treatment as well as for tourism for various states of India.

An American producer, and writer from New York, Jack Nicholson is a celebrated actor for movies like The Cry Baby Killer, The Raven, and The Shining. During his career of 60 years, he has performed a wide range of roles including supporting roles, comedy, romance, dark comedy, and wicked roles. With 12 nominations, Jack is the most nominated male actor in the Academy’s history.

As of 2021, the estimated net worth of Jack Nicholson is $400 million out of which a significant portion is from his real estate portfolio.

A well-known actor, Sylvester Stallone is one of the highest-paid Hollywood actors. Both the movies ‘Rocky’ and ‘Rambo’ were a huge hit that his fans still remember him for both the performances. His two biggest hit movies generated him approx. $4 billion.

As of 2021, the estimated net worth of Sylvester Stallone is $400 million and the majority of his earnings are from his films.

Arnold Schwarzenegger is an idol for all aspiring bodybuilders. Although he started his career as a professional bodybuilder, later on, switched to film line and that is the reason he has his name on the list of the richest actors in the world. He has earned hundreds of millions of dollars through his films in his entire career. Apart from being an actor, he has also worked as a model and is now a successful businessman.

As of 2021, the estimated net worth of Arnold Schwarzenegger is $400 million out of which a significant portion is due to his investment in real estate.

Clint Eastwood is a popular American director, film producer, composer, and actor and has even won the Academy Award for his two movies for best direction and production. He has earned his fortune from his movies.

As of 2021, the estimated net worth of Clint Eastwood is $375 million that makes him the 13th richest actor in the world.

Jackie Chan is a celebrated actor from Hong Kong and is also a well-known producer and director. Due to his amazing performances in several movies, he has managed to build his empire and made him capable of known as the 14th richest actor in the world

As of 2021, the estimated net worth of Jackie Chan is $370 million and most of his earnings are from endorsements and licensing deals.

A well-known Canadian actor, producer, director, and musician, Keanu Reeves, has been a part of multiple hit movies and some of his amazing performances include A Scanner Darkly, Constantine and others. Throughout his career, he has made a lot of money by giving hits and that makes him one of the richest actors.

As of 2021, the estimated net worth of Keanu Reeves is $360 million; the major chunk is from his films.

Sean Connery has several awards in his name including an Academy Award, two BAFTA Awards, and three Golden Globes. He is a well-known Scottish actor and producer and is known as the first person to portray the legendary character, James Bond.

As of 2021, the estimated net worth of Sean Connery is $350 million; he started making money while being in the navy and has also worked as a truck driver and babysitter.

Tom Hanks needs no introduction as he has been a part of a lot of hit movies such as Forrest Gump, Da Vinci Code, and Angel and Demons. He even did the voice-over for ‘Toy Story 3’ and as a result, the movie was the highest-grossing movie of the year; the movie earned him $1 billion in the box office.

As of 2021, the estimated net worth of Tom Hanks is $350 million, and he made most of his earnings through his films.

An American producer and notable actor from New Jersey, Michael Douglas has received several accolades including two Academy Awards, five Golden Globe Awards, a Primetime Emmy Award, the Cecil B. DeMille Award, and the AFI Life Achievement Award. He was also one of the successful producers of the 90s; although he started his career with a TV show, he eventually rose to fame for his acting.

An American actor, film, producer, and rapper, Will Smith is a well-known face of the entertainment industry. Although he was already a millionaire before he turned 20, he managed to convince his parents to become what he is today.

As of 2021, the estimated net worth of Will Smith is $300 million that comes from his various endeavors and he has managed to earn a lot of money in the last few years.

Robert Downey Jr. is a prominent face in the entertainment industry and is a well-known actor and singer from America. There is nothing much to say about this incredible actor as his amazing journey is enough to speak for him. He is also recognized for being a part of popular movies like Iron Man, Sherlock Holmes, and The Avengers.

As of 2021, the estimated net worth of Robert Downey is $300 million making him one of the richest actors. He was even listed as Hollywood’s highest-paid actor from the year 2013 to 2015.

Brad Pitt has appeared in the list of highest-paid actors by Forbes for many years. Brad Pitt, a well-known American actor, and producer has a lot of awards in his name and is globally known and loved for his acting and versatility.

As of 2021, the estimated net worth of Brad Pitt is $300 million out of which his primary source of income is acting and his production company.