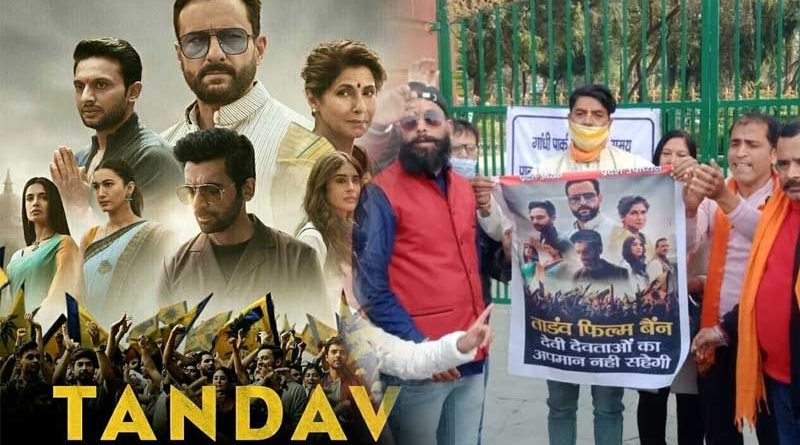 Ali Abbas Zaffar’s Tandav released on Amazon Prime this weekend and there is nothing about it that makes it stand apart. Moreover, Tandav has landed itself into controversy for allegedly showing Hindu gods in a negative light. Many BJP leaders have complained about the Tandav web series for hurting Hindu religious sentiments. The Saif Ali Khan starrer also has Dimple Kapadia, Gauhar Khan, Sunil Grover, Dino Morea, in the prominent roles. The series has been set and performed in Delhi and the story revolves around power, passion, and selfishness including a political angle. The story raised the anger of the people when people claimed that it disturbs communal harmony and hurts the sentiments of the Hindus. In the web series, there is a scene featuring Mohd. Zeeshan Ayyub insults the Hindu deity Shiv while performing a college play.

On Sunday, BJP leader Ram Kadam told that a complaint has been filed against the web series at Mumbai’s Police Station and he will even go to the Amazon Prime Video office to seek an apology. BJP MP Manoj Kotak has also filed a written complaint to I&B minister Prakash Javadekar to put a ban on the series for mocking Hindu Gods. On Sunday night, an FIR was lodged against director Ali Abbas Zafar and writer Gaurav Solanki at Lucknow’s police station, and seeing this security has been tightened in front of Saif Ali Khan’s house. Even the Information and Broadcasting Ministry summoned Amazon Prime Video officials regarding the web series controversy.

Now, the makers of the web series Tandav have apologized for inadvertently hurting the religious sentiments by releasing a statement.

Here is what the apology says:

After the controversy, the web series rating has already dropped to 3.5 for mocking Hindu Gods. But this is not the sole reason for the poor rating of the much-hyped Tandav web series. Despite a stellar star cast, Ali Abbas Zafar’s Tandav failed to impress the audience as the story lacks powerful writing, and Dimple Kapadia has proved to be the best out of the lot in terms of performances.