Bollywood Stars Whose Untimely Death Left the Nation in Shock 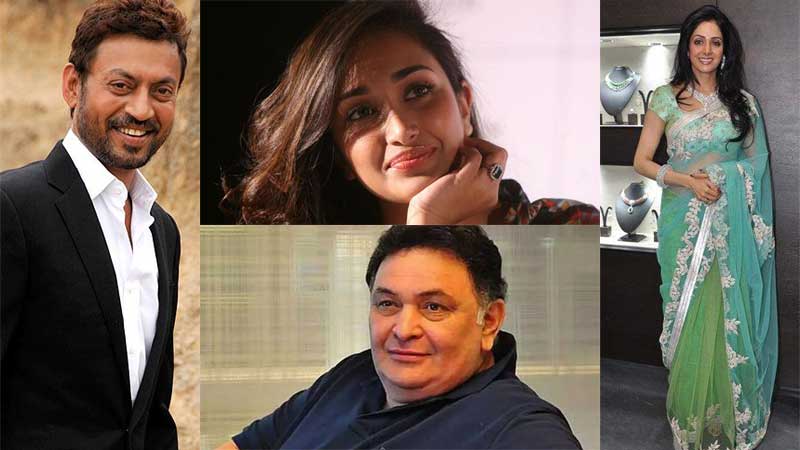 Life is so unpredictable that you never know when the person you loved the most will leave you behind forever. It is the harsh reality of life that everyone has to face. Even some of the Bollywood actors have met unfortunate and unexpected death that has left the nation in shock.

Dying at old age is sad but if someone dies early or an unnatural death, it leaves more pain behind. There are Bollywood celebrities who have shaken the world by their early demise. Let’s read about them:

News of suicide of Sushant Singh Rajput came as a bolt from blue and got everyone from his family, friends, Bollywood industry and fans in a state of extreme shock. No one except his sister and a few close friends were aware of his mental condition that he was suffering from depression for the last six months and was on medications.

The 34 year old ‘Chhichore’ actor was found hanging at his apartment at Bandra, Mumbai, however, there was no suicide note found. He has already given a number of hits in his 7 years Bollywood journey; however, he will still be remembered as ‘Manav’ of ‘Pavitra Rishta’. The reason of Sushant’s death is reportedly ‘Depression’ but what put him in this state of shock was Bollywood’s biasness towards self-made actors as they always support Nepo Kids. Reportedly, he got banned from well-known banners after getting into an argument with a famous producer. Out of 7 movies that he signed recently, 6 were taken back and all these led him take such an extreme step.

Sudden demise of actor Irrfan Khan left all his fans and the Bollywood industry in shock. This Bollywood star was even loved by Hollywood and made a mark there as well.

Died at the young age of 53, Irrfan Khan was diagnosed with cancer in 2018. Since then he was fighting for his life and got admitted to a Mumbai hospital for colon infection where he passed away just 4 days after his mother died.

In a short career of 30 years, Irrfan gave us so much to remember with his exceptional movies like Paan Singh Tomar, Life of Pi, The Lunchbox, Maqbool, and so on. With so many awards in his name, Irrfan Khan will always be remembered for his lasting roles.

2020 cannot be worse than this when Bollywood lost two of its legends just one after another. When everyone was recovering from the unexpected death of Irrfan Khan, the next morning it was the evergreen heartthrob, Rishi Kapoor Saab who left all of us for heavenly abode.

The actor, who gave his first on-screen appearance in the song ‘Pyaar Hua Ikraar Hua’, lost his life after battling cancer for two years.

Worked in more than 100 films, Rishi Ji devoted his life’s 50 golden years to Indian cinema. Even after hailing from a family of stars, his sheer hard work and dedication earned him the title ‘Showman of Indian Cinema’. The ‘Bobby’ actor was taken to a Mumbai hospital after complaining about difficulty in breathing where he took his last breath with his wife Neetu Kapoor and son Ranbir Kapoor around.

Sridevi untimely death shook the entire Bollywood fraternity and her fans. She was found unconscious in her bathtub in Dubai by husband Boney Kapoor. She was there to attend the marriage of her nephew when the incident happened.

The Hawa Hawai girl has worked in around 300 films and started her career when she was just 4.

Her rumored marriage with Mithun Chakraborty didn’t work so she got divorced and got married to Indian film producer Boney Kapoor.

There were so many speculations about Sridevi’s death as no one believed that she can get drowned in a ‘one-foot’ bathtub, some called it suicide attempt as she was reportedly not happy with her married life.

The debate is still on whether it was an accidental drowning or a murder.

Divya was just a teenager when she died after falling off the balcony of her fifth-floor apartment. She was the youngest heroine of the silver screen who got successful quickly. Her resemblance to the superstar of that time Sridevi got her first movie offer when she was just 14. After that there was no looking back and she soon touched the stardom heights.

Divya Bharti was just 18 when she got married to Sajid Nadiadwala in a secret marriage and it was on 5 April 1993, when she fell off her building. Around 500 people attended her funeral including the Bollywood stars. Her death is still a mystery whether it was an accidental fall or wishful death.

Another young talent gone too soon, Jiah Khan was a British American actress and singer who even appeared in a few Bollywood movies. She made her debut with the controversial movie ‘Nishabd’ opposite Amitabh Bachchan in 2007. She even appeared in supporting roles in movies like Housefull and Ghajini. However, her career never took off and this led her fall into depression.

She reportedly committed suicide when she was just 25, at her Juhu residence in Mumbai. The speculations were she hung herself out of depression while the marks on her neck and face were telling a different story. Her boyfriend Sooraj Pancholi was interrogated for the same, because of the hand-written letter found at Jiah’s residence where she mentioned everything about her relationship, the physical abuse, as well as the mental torture that she experienced. However, due to a lack of evidence, the mystery was closed as a suicide case.

Madhubala was the superstar of the 50s and 60s and is most remembered for her role in Mughal-e-Azam in which she played the role of ‘Anarkali’. She is still talked about for her spectacular beauty; however, she died young at the age of 36 due to a hole in her heart. The illness made her produce extra blood that she would spill out from the nose and mouth. After being confined to bed for 9 years, it was in 1969 when she was about to make her directorial debut, she died shortly after her 36th birthday.