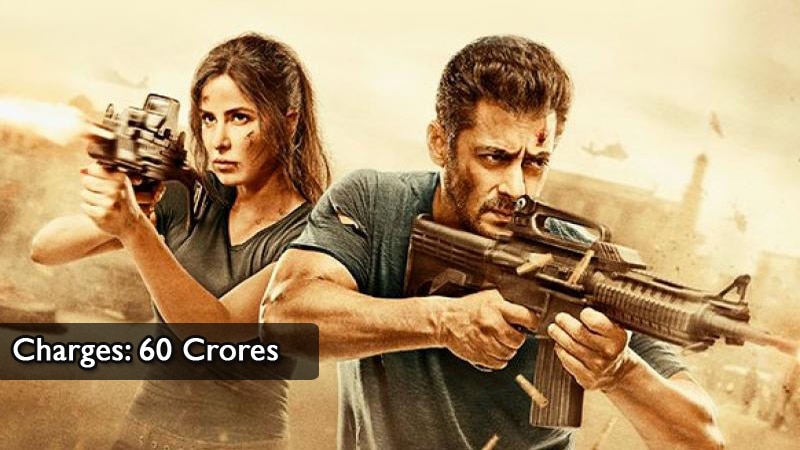 The Bollywood industry is a machine to produce a lot of money and contributes a huge share towards the growth of the Indian economy. It attracts audiences from all over the world thus bagging money from every corner of the globe. Bollywood is now the second-largest entertainment industry after Hollywood and shockingly its value has gone up to around 3 billion US Dollars just in the past few years. And, seeing statistical data of the Bollywood industry, even the popular international magazine Forbes is listing Bollywood actors, actresses, and movies on the top spots.

There are many popular stars of the industry like Shahrukh Khan, Aamir Khan, Salman Khan, Amitabh Bachchan, Akshay Kumar, Hrithik Roshan, Varun Dhawan, Ranveer Singh, Tiger Shroff, and so on who successfully secured themselves a position in the highest-paid Bollywood actors list but, as there is no certainty in their salary, the top positions shuffle every time. Thus, every year the curiosity increases to know who topped the list of highest-paid actors. However, this year, unfortunately, there’s no possibility of coming out with the list of highest-paid actors of 2020 as the cinemas went down due to the Novel Coronavirus, and no new movie of any stars has been released so far except a few on the OTT mediums.

So, having that in mind, today we’re here to unfold the list of 2019-2020’s top 7 Bollywood actors who dominate the industry by their name, skills, fame and thus earning higher in terms of their salary. You might be shocked to know the fee they charge for a movie or endorsement and thus taking away a lot of bucks to their home. Therefore, they are slotted in the list of top paid Bollywood actors. Have a look:

Akshay’s Bollywood journey is definitely the talk of the town as even after delivering 11 back to back flops in the starting, he managed his career well with his hard work and passion that today he secured the top position in the list of highest-paid actors of Bollywood. He is the only real Khiladi of Bollywood, who is fighting alone with the top 3 khans (Salman, Shahrukh, and Amir) in the race of earning the highest amount of money. He is a top lead movie star and producer. Akshay does not charge as much as all the khans do, still, he stands in front of the race because he does more than 3 movies a year.

Apart from acting in the movie, he also owns a production house, through which he has produced super hits like Airlift, Pad Man, and Rustom. Hence, he is making a lot of money from his acting and production house and it leads him to be the highest-paid actor in Bollywood. Apart from that, Akshay is the only actor from Bollywood who recently ranks at position 6 on Forbes’ 2020 list of 10 Highest Paid Male Actors with his earnings of last year estimated at $48.5 million.

Salman Khan fondly called ‘Bhai’ by the men of the country is loved by each generation. This actor is the son of a renowned writer Salim Khan and known for his gorgeous looks. He started from “Biwi ho to Aisi” and from then, he never stopped. He has given back to back super hits such as Dabangg series, Bajrangi bhaijaan, Kick, Ek Tha Tiger, Sultan, and so on to the country and thus charging a big amount for his movies.

With having more than 1 billion fan followings Salman is known for his Blockbuster hits, his charity, and his NGO Being Human. Therefore, the handsome hunk holds 2nd spot in the 2019-20 list of highest-paid Bollywood actors.

Mr. Perfectionist is known to work in only one movie in a year, as he focuses on every minute detail. With eight FilmFare awards, four national awards, one Padma Bhushan award, he stands high in the list of top-paid actors of the industry. From Qayamat Se Qayamat tak, to till the date, Amir has given blockbuster hits one after another. Not only India, but this actor has also immense fan-following in China. Apart from acting, Amir directs and produces films as well that makes him secure this 3rd position in the 2019-20 list of highest-paid actors.

He is the king khan of Bollywood and thus spotted at 4th position in the list of Bollywood highest-paid actors, 2019-20. He has been also listed as the richest actor in Bollywood by Forbes magazine. Had his popularity not been doomed, he would have taken the first spot in the list because he earns from many resources including award shows, endorsements, events, and marriage parties.

With 14+ Filmfare awards, King Khan has given several iconic movies like Dilwale Dulhania Le Jayenge, Mohabbatein, Kuch Kuch Hota Hai, Kabhi Khushi Kabhi Gham, Darr, Bazigar, Dil to Pagal Hai, Chennai Express and so on to the countries and thus, his fan following is unmatched. He is known as the King of romance and several younger actresses are dying to play on-screen romance with King Khan, and thus charging approx. 40-45 crore for a movie is not a surprise to us.

Hritik is next in the list of highest-paid actors. He is the son of famous actor and filmmaker Rakesh Roshan. This man is known as the Greek God of Bollywood for having attractive looks and a well-built physique. With movies like Kaho Na Pyar hai, Dhoom 2, Jodha Akbar, Guzaarish, Zindagi Na Milegi Dobara, Krrish, Bang Bang, Agneepath and more, the actor has left his audience amazed.

He charges around 30 to 40 crores for every movie depending upon the script and thus, grabbing the 5th spot in the list of highest-paid actors, 2019-20.

Vishal Veeru Devgan is the real name, Ajay Devgan. With his first movie “Phool aur kaante” in 1991, the actor left a strong impact on audiences by his jaw-dropping performance. He consistently performed well in all his movies. His intense eyes became his trademark and helped him to get strong roles. Due to his charming looks, outstanding acting, and versatile performance, he charges a good amount per movie; and that made him grab the position of one of the top-paid Bollywood actors.

Ranbir is the youngest in the list but not an amateur actor. He is the son of the duo ‘Rishi and Neetu Kapoor’; well-known actors of their time. He has been announced as the most beloved celebrity by Forbes India. He placed his foot in industry with Saawariya in 2007 and has given several super hits like Barfi, Ajab Prem ki Gajab Kahani, Rockstar, Rajneeti, Sanju, and so on. This makes him the well-established actor of the industry who is honored with the Filmfare award twice. Along with that, he’s also managed to make his name at the spot 6 in the 2019-20 list of highest-paid actors for charging around 25 crores per film.

He is the one who doesn’t need any introduction! Popular among all the generations of India, he’s distinguished as the legendary actor of Bollywood. From the very start of his career in the year 1969 with the film ‘Saat Hindustani’ to till now, he has worked in many movies like Deewar, Namak Haram, Zanjeer, Agneepath, Don, Sholay, Pink, Paa, Badla and many others. With the tag of one of the highest-paid actors, Big B also won 15 Filmfare Awards as well as 4 National Awards. He’s still a top choice of many filmmakers and thus, all this makes him secure the 7th position in the highest-paid actor’s list of 2019-20.