15 Lesser-Known Bollywood Celebs from a Family of Actors 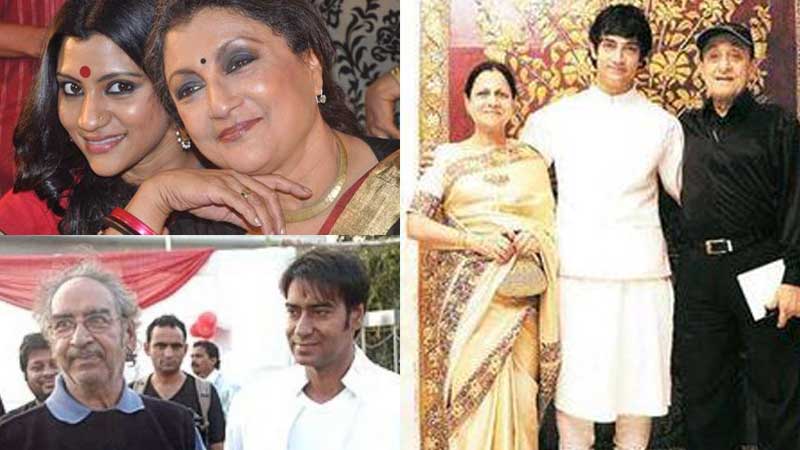 For a star kid, it is assumed to be a cakewalk to enter into the Bollywood industry. Someone from a family of actors can easily get movies from big banners without standing in the queues of auditions. Nepo kids get all the stardom and limelight served on a plate without making much effort because of the family they hail from. However, there are many Bollywood celebrities who you didn’t know come from a well-known family of actors or they have preferred to keep it on the down-low.

Have a look at the list of actors whose family belonged to Bollywood industry that you were not aware of:

One of the most promising Bollywood actors, Ajay Devgan is the son of prominent action choreographer ‘Veeru Devgan’ who has directed stunts for movies like Mr. India, Tridev, Ishq, and others. Did you also know his mother ‘Veena Devgan’ was also a producer?

We all remember ‘Mehmood’ for playing comic roles in Bollywood and he has done more than 300 Hindi films, however, only a few know that he was the father of Lucky Ali, who sang the famous song ‘Ek Pal Ka Jeena’ and several others. I bet you didn’t know about it.

Nepotism in Bollywood has its positive side in the face of Mr. Perfectionist Aamir Khan. If you were thinking of him as an outsider, let me tell you his father ‘Tahir Hussain’ was not only a famous filmmaker but has also directed his son in ‘Tum Mere Ho’, his directorial debut.

Everyone is familiar with Anil Kapoor’s brothers Boney Kapoor and Sanjay Kapoor but did you know that his father ‘Surinder Kapoor’ was also a famous Bollywood film producer; he also served as the president of Film & Television Producers Guild of India from 1995 to 2001.

Konkona Sen Sharma, an award-winning actress also comes from a filmy background that only a few of us know. Her mother ‘Aparna Sen’ is known for her achievements in Bengali cinema and is a director as well. Konkona received the National Film Award for Best Actress for the English-language film ‘Mr. and Mrs. Iyer (2002)’, directed by her mother.

We all know Kajol comes from a filmy background as her mother ‘Tanuja Mukherjee’ is a legendary actress, but did you know her father ‘Shomu Mukherjee’ was also a Bengali Indian director, writer, and producer?

Yesterday’s nepotism was very beautiful in the form of Rekha Ji. The talented, gorgeous, actor is the daughter of Tamil superstar ‘Gemini Ganesan’ who was known for his romantic roles and was one of the biggest names of Tamil Cinema. Rekha is one such talented star kid of Bollywood that no one can deny.

Javed Jaffrey gave us a dose of laughter with his movie ‘Dhamal’ but did you know his father ‘Jagdeep’ was also a famous Bollywood comedian? Jagdeep who was a part of popular movies like ‘Sholay’, ‘Agent Vinod’, and ‘Andaz Apna Apna’ has done more than 400 films.

Another talented nepo kid or better call him a star kid because Govinda’s father ‘Arun Ahuja’ was a famous Bollywood actor during the ’40s but ended his career in 1954 after giving a major flop movie. Govinda is a star of his time and has done more than 140 movies to date.

Vivek Oberoi didn’t enjoy much stardom due to his involvement in controversies even after having a Bollywood connection. His father, ‘Suresh Oberoi’, is an Indian actor and politician who had been a part of several successful movies of his time such as ‘Phir Wahi Raat’, ‘Tezaab’, ‘Do Qaidi’ and others.

If you didn’t guess it from his name, Neil also belongs to a star family and is the grandson of legendary singer ‘Mukesh’ but we never saw him using his name to get fame in Bollywood. Not only this but his father, ‘Nitin Mukesh’ is also an Indian playback singer and has given his voice to multiple songs and bhajans. Even after being great at acting, this nepo kid didn’t get good roles in Bollywood films.

Although Yami Gautam is an outsider to Bollywood, still she has some filmy connections. Her father, ‘Mukesh Gautam’, is an Indian film director and works in Punjabi-language films. Only a few know that ‘Surilie Gautam’, her sister, is an Indian film and television actress who has starred in TV serials and Punjabi movies.

Having a producer dad cannot get you stardom in Bollywood and this has been proved by Jacky Bhagnani, son of Indian film producer, ‘Vashu Bhagnani’. Except for his movie ‘F.A.L.T.U’, this star kid is still struggling to make a mark in Bollywood and has some upcoming projects for 2020.

Riya Sen also hails from a family of actors as her mother ‘Moon Moon Sen’ was an Indian actress and her grandmother ‘Suchitra Sen’ was also a Bengali and Hindi film actress. Even after hailing from a filmy background, Riya Sen failed to make a mark in Bollywood films, however, she still has several achievements to her name.

Last on the list is Prateik Babbar who is the son of legendary actor-turned-politician ‘Raj Babbar’. Raj Babbar has successfully made his place in Bollywood and contributed a lot to the Indian cinema and Punjabi industry as well. His other son Arya Babbar and daughter Juhi Babbar are also popular names in Bollywood and Pollywood.