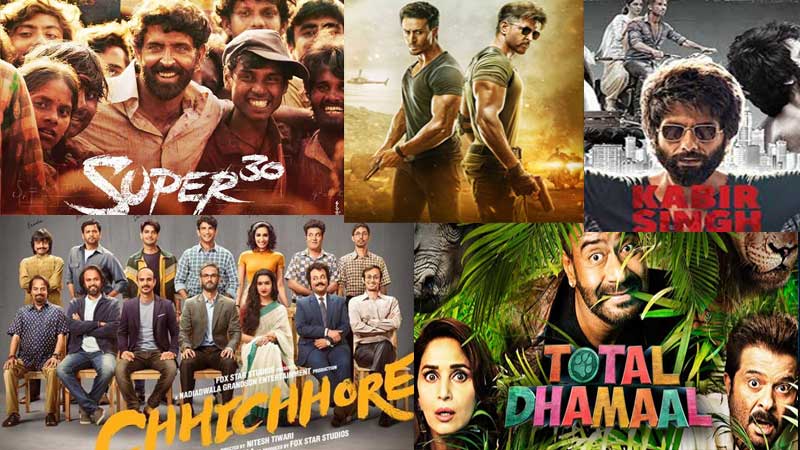 A lot of movies have been produced in 2019 by great directors and producers but not every movie gets fortunate to hit the box-office. Nevertheless, there are a number of movies which created a stir at the box office and proved to be one of the highest-grossing Bollywood movies of the year.

Without any delay, we are dropping here the list of top 10 movies which became top grosser of Bollywood in 2019.

It is a biopic of mathematician Anand Kumar, played by none other than the Greek god of Industry- Hritik Roshan. The movie Super 30 is lauded by the audience because of the rock-solid storyline and Hritik is also appreciated for his portrayal of legendary Anand Kumar. Hence it became a hit Bollywood movie of 2019.

The movie Chhichhore featuring Shraddha Kapoor and Sushant Singh Rajput in pivotal roles has come out as a surprising box-office figure as the expectation wasn’t high with this movie, but it managed to get the spot in the list of top Bollywood movies 2019.

It is another addition of the Dhamaal franchise and this time the movie created hype due to the iconic pair Anil Kapoor and Madhuri Dixit playing comedy characters in the film. It created the magic in the box-office thus featured in the list of top 10 box office collections of 2019.

Starring Alia Bhatt and Ranveer Singh, Gully Boy movie has won so many hearts due to the epic depiction of rapper Vivian Fernandes aka Divine’ inspiring career. The movie is rewarded as the best film of the year at India FilmFare and won many more awards. It is also nominated for the Oscar awards.

It wasn’t fair to put this low-script movie in the list of top Hindi movies 2019, But we are bound to do that as it has collected a decent amount at box-office.

One more movie of Akshay Kumar is among the top grosser of Bollywood, Mission Mangal is totally worth it. It is a multi-starer movie and got it all right to be on the list.

The iconic duo Salman and Katrina doesn’t need any solid script to hit a movie. The duo is so bankable that it guarantees a hit movie and that’s what happened with Bharat.

With this movie, Vicky Kaushal became a superstar as he was lauded by critics and audience as well for his portrayal of an army man. Uri completely deserves to become a Bollywood blockbuster movie.

Another blockbuster of the year was Kabir Singh. It created havoc as soon as the trailer was dropped in, due to its misogynist content. The hype was so much that the movie is ranked as the second-highest-grossing Hindi film.

War featuring Hrithik Roshan and Tiger Shroff together didn’t get any acclaim from the critics because of the thin storyline but it was lauded by the audience due to action sequences played by the real machos of the Industry.

Highest-grossing Indian Movies of all time