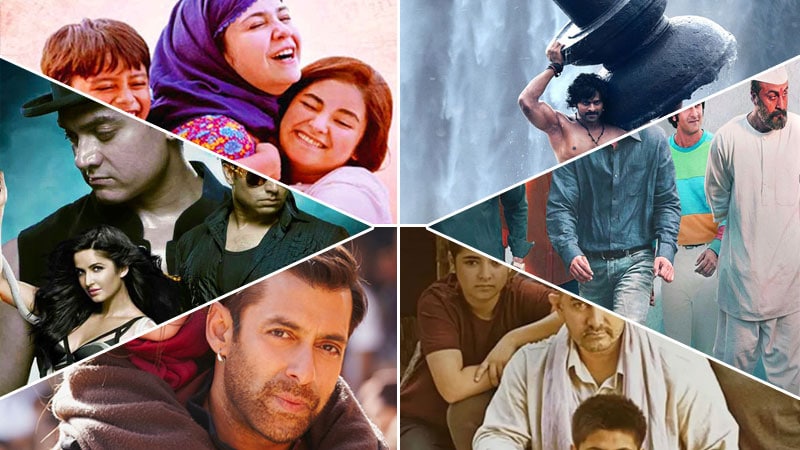 Bollywood industry has seen massive growth over the years and currently it is the world’s largest film industry in terms of output. Quite a few newcomers have entered the industry as well and trying to leave a mark with their mark. But the Khans are still ruling the industry and giving non-stop hits. Bollywood has continued to make content-rich films that are crossing the 100-crore mark.

Read on to know about the highest-grossing Bollywood movies of all time.

Amir Khan never disappoints his fans and this time it was ‘Dangal’ that made it among the top movies. Based on the transforming journey of two daughters of Mahavir Singh Phogat into world-class wrestlers, Dangal set a whole new benchmark. It was the second-highest non-holiday opener after Dhoom 3.

Because of the Bahubali series, the audience got to see the level of visual effects in Indian cinema. The first part of the series ‘Bahubali: The Beginning (2015) upped the game with its massive earnings in 2017. The most famous question “Why did Kattappa kill Baahubali?” gave rise to the second part. Made on a budget of ₹250 crores, bahubali 2 collection till today has crossed the mark of ₹1,800 crores. Bahubali 2 broke all the records and became one of the highest-grossing movies in India.

On Number three, it is no one but ‘Salman Khan’ Starrer ‘Bhajranig Bhaijaan’ that showed him as a life saviour to a Pakistani Girl by taking her back to her country. The film is a mix of emotions and acting of ‘Nawazuddin Siddiqui’ gave a good laugh to the audience. Released on Eid, the film worked like a lucky charm for Salman.

Another hit by ‘Amir Khan’, Secret Superstar is a story of a teenage girl aspiring to become a singer becomes a Youtube sensation. Mr Perfectionist was appreciated for his role and that’s why this film made it to the list of highest-grossing Bollywood movies.

Known as the costliest movie of Indian Cinema, 2.0 is a superhero film showing the fight between the super intelligent Chitti and supervillain ‘Akshay Kumar’. ‘Amy Jackson’ played the role of Nila, a feminine humanoid robot. 2.0 created history by earning ₹290 crores in just 3 days.

Another Rajkumar Hirani film made it to the list of top-grossing Bollywood movies. The movie created history by becoming the first Bollywood film to enter the Rs 300-crore club in 2014. The film invited so much wrath from the religious groups still the story managed to touch people’s heart.

This movie marks the first instalment of the Indian fiction series. Set in an ancient India setup, Bahubali was shot in Telugu and Tamil and later on dubbed in Malayalam and Hindi. At the time of release, it was the most expensive Indian film that earned it a place among the highest-grossing movies of Bollywood.

One more Salman Khan Starrer made it to the list of top Indian movies, Sultan is a sports drama film. The story revolves around a fictional “pehalwan” (wrestler) whose wrestling career leads to clashes in his family life.

Bollywood is successfully running on the path of creating biopics these days. No other biopic got so much attention as the movie ‘Sanju’ that was based on the life of actor ‘Sanjay Dutt’. Played by ‘Ranbir Kapoor’, the movie showed the life of Sanjay Dutt full of ups of downs. Ranbir’s flawless performance made it a part of the highest-grossing Indian movies.

A period drama set in medieval Rajasthan, Padmavat has its name in the list of most expensive films. It is the story of Rani Padmavati, Maharawal Ratan Singh, and Sultan Alauddin Khilji. Padmavat stirred so many controversies and it was the first Indian film to be released in IMAX 3D.

Tiger Zinda Hai is another hit by Salman Khan. The film is a sequel to ‘Ek tha Tiger’ (2012) and the storyline is based on the 2014 abduction of Indian nurses by ISIL, a terrorist militant group.

Dhoom 3 is the third instalment of the Dhoom series and the story revolves around a circus trainer turned into a thief to take revenge from the bank that ruined his father’s life. The film managed to perform really well and was screened during the 2014 International Film Festival of India.

War is the latest release that has acquired its place in the Bollywood’s highest grossing movies. An action thriller film, War has two most handsome and promising actors as part of it. Released on Gandhi Jayanti, this film received the most positive reviews from the critics as well as the audience.