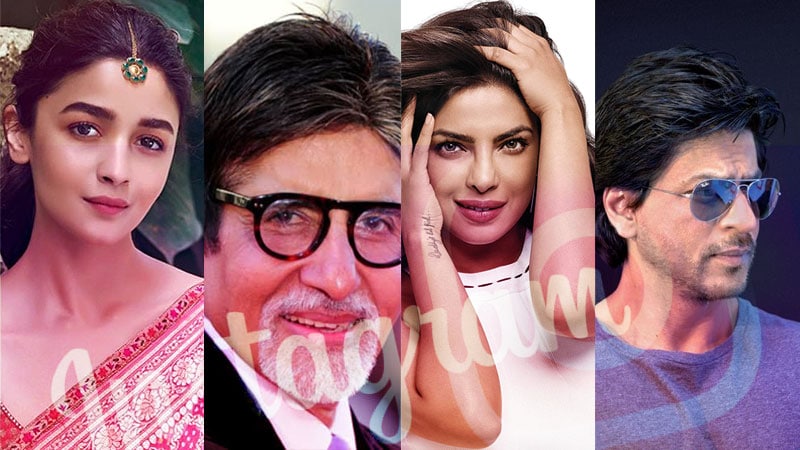 Glamor, glitz, and trends are the three things that you need to have as a Bollywood star. In India, Bollywood celebrities have the largest fan following, few of them are worshipped like a God. The madness and love of people towards their stars can’t be measured with equipment. They are watched by over a billion population, everything they say, do become the talk of the town. Fans follow them everywhere whether its movie theatre, film sets, and public places. The Bollywood stars can be found surrounded by the crowd.

Now the technology has moved to the next level, everything has become online. Now fans have the new way to keep an eye on their stars; that is Social media. Platforms like Facebook, Instagram and Twitter are the modern means to figure out the popularity of any celebrity. The more fans, members and followers they have, the more popular they are considered.

Bollywood celebrities also utilize these platforms to promote their work, brand and interact with fans.

Social media is also the easiest mean for fans to adore their favorite celebrity and ogle over their activities.

Priyanka Chopra Jonas is the well-known Indian actress, singer, film producer, and the winner of the Miss World 2000 pageant. She is one of India’s highest-paid and most popular celebrities in Bollywood. Her popularity recorded an incredible jump after she got married to American Singer Nick Jones. Thus, she tops the list of popular Bollywood stars on Social Media with a total of 113.8 million followers. Here are the stats of her social media followers on all three platforms.

The above table clearly shows the popularity of this actress. She is one of the first actresses of Bollywood who touched the milestone of 40 Million followers on Facebook and Instagram. Her social media pages are well-maintained and she loves to interact with the followers.

Deepika Padukone is another leading lady from the Bollywood who rules all the top three social media platforms with 108.6 million followers. She is one of the highest-paid actresses in the B town. Deepika posts a lot about the fashion photo-shoots and promotional stuff on her social media pages. Recently she is in news for her brilliant performance in chhapaak.

Salman Khan is the most commercially successful star of Bollywood and equally known for his charity and kind heart. His down to earth gesture can attract anyone. That’s the reason he is the most popular and respected celebrity in B.Town. He has a unique range of fans who consider him as a God. His social media pages shows his immense popularity. He has more than 104 Million combined followers of the top 3 social media platforms.

Rajiv Hari Om Bhatia aka Akshay Kumar also known as the Khiladi Kumar. This versatile actor is known for its brilliant acting, action and comedy skills. He is one of the natural actor in Bollywood. Starting from action hero in the 90’s to getting national awards for Rustom and Airlift, the journey of the fittest actor on Bollywood is fantabulous. Apart from movies, Khiladi Kumar also loves to play on social media. He has more than 93.8 million followers.

The King Khan of the Bollywood; is the biggest and the global brand. The popularity of this actor is massive, as he is the richest actor in the world. King Khan has 88.9 Million followers on social platforms.

Who doesn’t know about Amitabh Bachchan, the millennium star of Bollywood. His dominance and popularity can’t be described in words, he is ruling this industry from the last 5 decades. He is also active on social media, he loves to share personal experiences with the followers along with his poetry and images. Also, appreciate the young talents on his social media accounts. Here are the stats of his followers on social media.

When it comes to a new generation of Bollywood stars, Shraddha Kapoor looks promising as she can act, sing and dance. The daughter of veteran actor Shakti Kapoor is the complete package. She has a number of successful movies in the bucket. This charming actress has huge fans base on social media, below stats give you an overview of her popularity.

He is the most charming and handsome personality in the Industry. His acting and dancing skills made him the heartthrob of Bollywood. He is also called as the Greek God due to his awesome body physics and good looks. This Indian superhero has been voted as the Sexiest Asian Male of 2019. Hrithik Roshan loves to post on his social media accounts and has millions of followers.

This bubbly actress made her debut with blockbuster Student of the Year. Since then she has been winning the heart of millions of people with awesome acting, dancing and singing talent. The daughter of Mahesh Bhatt (a well-known director) known for choosing challenging roles and playing it gracefully. She showed her acting talent in movies like Highway, Udta Punjab, Humpty Sharma’s Ki Dulhania and Gully Boy. She has more than 40 million followers on Instagram.

She is one of the self-made celebrities in Bollywood. Started her career with super hit movie Rab Ne Bana Di Jodi opposite non-other than Shah Rukh Khan. Since, then she has successfully given incredible performances in movies like Ae Dil Hai Mushkil, PK, Sultan, Band Baja Baraaat, Jab Tak Hai Jaan and more. Her marriage with the Indian cricket sensation Virat Kohli in 2017 created a lot of buzz in Bollywood. She is highly active on social media, where she loves to promote her clothing brand Nush. Her Instagram profile has more than 30 million followers. Also has millions of followers on Facebook and Twitter.