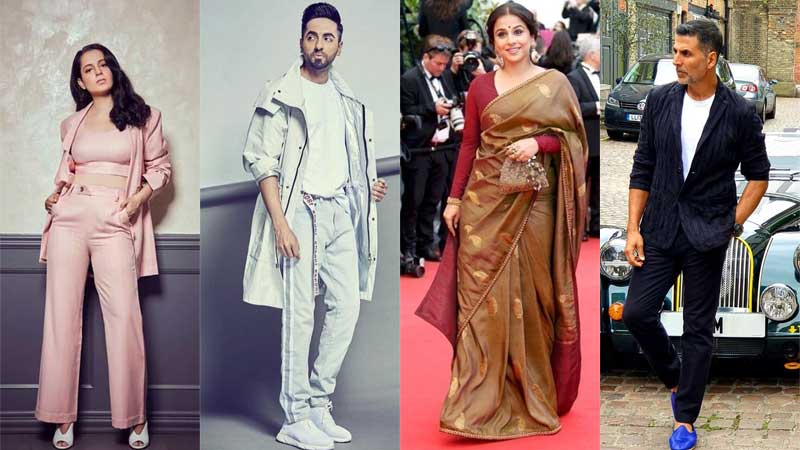 The debate on nepotism and favoritism in Bollywood has attained a new height after Sushant Singh Rajput left all of us for heavenly abode. No one knows the exact reason for his death but those who are familiar with the discriminatory behavior of Bollywood with outsiders are blaming nepotism and Nepo kids for this unfortunate incident. Reportedly, Sushant lost 6 out of 7 films from big production banners and that is clearly hinting upon something. For this Alia Bhatt and Karan Johar have already lost millions of Instagram followers for being thought of as the demons.

Now as things are unfolding and the truth is coming out, so many Bollywood actors and actresses are opening up about bearing the brunt of nepotism. This clears out that not only Sushant, but there are many other victims of nepotism also in Bollywood who have faced discrimination during their career; let’s have a look at them:

Kangana Ranaut is always vocal about her thoughts; she initiated the controversy by calling Karan ‘the flag-bearer of nepotism’ in Bollywood. It was her who started the entire debate and she said “When I came into the films from the very beginning, I faced it, all of that, but I never thought it can be so fatal you know. There have been many challenges and I felt maybe nepotism is one of those that I can override and turn it into my favor.”

The ‘Desi Girl’ who made her mark in Hollywood too also faced nepotism. In one of her interviews, she told “Every star has their individual journey. In mine, I have faced a lot. I have been kicked out of films because someone else was recommended to the producer. I cried and got over it.”

Abhay Deol explained how industry discriminated and nominated him for a ‘supporting role’ in ‘Zindagi na Milegi Dobara’  while Hrithik and Katrina were nominated as ‘lead actors’ saying it was a love story and not about the journey of three friends on a Euro trip.

On Koffee with Karan, Ayushmann Khurrana shared an incident with Karan where he asked for Karan’s number and was given a landline number. When he called up that number he was told that Dharma Productions don’t audition newcomers or outsiders. He also thinks if he was a star kid, he would have been launched by 22 or 23.

One of the finest actors of the new generation, Rajkumar Rao has his share of nepotism experience where he saw various undeserving or non-talented actors getting chances instead of him. He thinks favoritism is not an issue if it is not affecting talented people.

Raabta actress, Kriti Sanon even had a face-off with nepotism and it affected her career too.  She was once replaced by a star kid in a film and that did not happen once but multiple times, as said by the actress.

She is known for her intense roles, Taapsee Pannu reminded her days when she was replaced in a film for not being a star kid. She also said that it got her shattered and she was even removed from ‘Pati Patni or Who’ without any clear reasons.

The girl who shot to fame with ‘Hate Story 2’ and ‘Sacred Games’ was dropped off from a file to replace her with a star kid. She left her successful television career to make a mark in Bollywood and is now one of the leading actresses in the Punjabi Film Industry.

In one of her statements, Swara Bhaskar hinted upon nepotism ”Bollywood as an industry is based on relationships, it has always been star-driven and it has an element of feudalism. So, it would be difficult for an outsider but my experience of Bollywood is not nepotistic at all,”.

Recently Saif Ali Khan called himself a victim of nepotism and said inequality in India needs to be explored. Since then, netizens have been reacting with memes and jokes as everyone knows his filmy background and the royal ‘Pataudi’ family, he hails from.

During the promotions of Shakuntala Devi, ‘Vidya Balan’ shared her nepotism story when she was replaced in 12 south Indian films within three years and that time acting looked an unachievable dream to her.

Late Inder Kumar who died of cardiac arrest in 2017 was also a victim of Nepotism in Bollywood according to his wife. Actor who was at the peak of his career in his 90’s went to Karan Johar for work who made him wait for a long before telling him that there is no work for him. After this, Karan Johar even blocked her, the incident was shared by his wife Pallavi Kumar in her Instagram post.

No one is unfamiliar with Akshay Kumar’s struggle to reach where he is today. His old video from his early days got viral where he shared about being replaced overnight by Ajay Devgan for his first film ‘Phool Aur Kaante’.

These were some of the Bollywood actors who openly shared about facing the consequences of nepotism in the industry. There are many other actors like R Madhvan, Randeep Hooda, Sharman Joshi, Arshad Warsi, Ranveer Shorey, Rahul Bose, Kunal Kapoor who have impressed the audience with their acting but we don’t see them doing any movies with big banners.