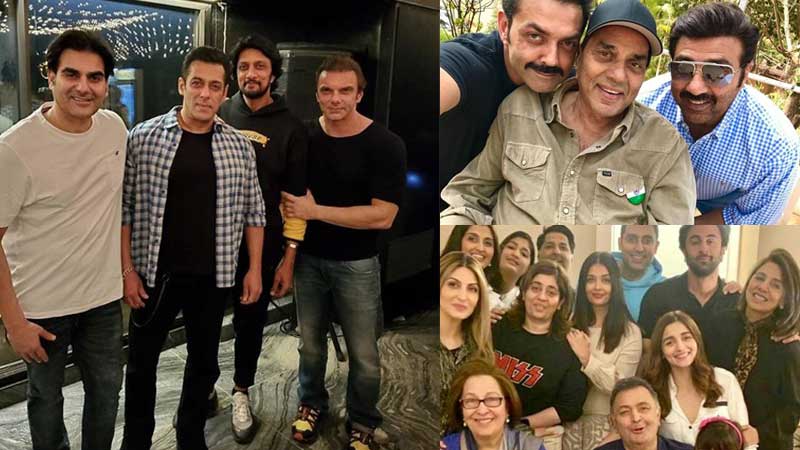 If you have ever wondered why some actors are still getting movies even when they lack the skill, let me introduce you to the term ‘Nepotism’ that is most prevalent in Bollywood and is the hottest topic of B-town since the shocking demise of Sushant Singh Rajput. As soon as the news surfaced, fans of the late actor started calling out nepo kids like Alia Bhatt, Sonam Kapoor, responsible for his death. Even Karan Johar and Salman Khan were openly criticized for promoting their acquaintances irrespective of the talent they have.

However, Karan Johar cannot be the only one to be blamed for promoting nepotism as this discrimination dates back to the 70s and 80s when no one talked about it. It was Kangana Ranaut who openly called out Karan as the flag-bearer of nepotism and made people think about it.

There are many 70s, 80s and 90s Bollywood actors who made an entry into the industry owing to their filmy connections and miserably failed to impress the audience, have a look at the star kids of all time:

Yes, you guessed it right; the trio, Salman, Sohail and Arbaaz Khan, sons of famous Indian film actor, producer and screenwriter ‘Salim Khan’ are the most talked-about star kids. However, only Salman made it to the top but he didn’t forget about his brothers’ career and helped them in minting money as well. Salman never shied away from promoting his loved ones and is often criticized for that.

Not every star kid is undeserving and this has been proved very well by Mr. Perfectionist, ‘Aamir Khan’. Son of well-known film producer and director, ‘Tahir Hussain’, ‘Faisal Khan’ failed to prove himself like his brother, Aamir. The duo was seen together for the first and last time in the movie ‘Mela’. Started as a child artist, ‘Imran Khan’, Aamir’s nephew even failed to impress the audience and was last seen in the super flop movie ‘Katti Batti’.

‘Prithvi Raj Kapoor’ gave birth to the Kapoor legacy or you can call it the hub of nepo kids. From ‘Raj Kapoor’, ‘Shammi Kapoor’, ‘Shashi Kapoor’, ‘Randhir Kapoor’, ‘Rajeev Kapoor’ to ‘Ranbir Kapoor’, Kapoor’s were and are there in every decade. It was ‘Karishma Kapoor’ who broke all the family norms and became the first woman to act from the Kapoor family; her sister ‘Kareena Kapoor’ followed her and got much success. ‘Ranbir Kapoor’, son of ‘Rishi Kapoor’ and ‘Neetu Kapoor’ will hopefully take the legacy forward. However, these days it’s ‘Taimur Ali Khan’ who is making the headlines just because of being a star kid.

Son of Indian film actor, producer, director and politician, ‘Sunil Dutt’, ‘Sanjay Dutt’ has proved how nepotism looks when it’s healthy. Although ‘Rocky’ (1981) directed by his father, was the launching vehicle for the star kid, he cemented his position in the Bollywood industry with the superhit movies like ‘Sadak (1991)’, ‘Yalgaar (1992)’, ‘Gumrah (1993)’. His upcoming movie ‘Sadak 2’ is about to be released on the OTT platform. His life is full of adventures that is why he also has a biopic ‘Sanju’ made on him.

Daughters of veteran actress ‘Tanuja’, ‘Kajol’, and ‘Tanisha’ have different experiences with Bollywood. Kajol got all the fame for her acting skills and gave super hits, while her sister Tanisha came out to be less deserving and not has a single hit in her name. She even participated in reality shows like ‘Bigg Boss 6’ and ‘Khatron Ke Khiladi 7’ but that didn’t make much difference. Let’s see if Kajol and Ajay Devgan launch their daughter ‘Nysa Devgan’ in Bollywood or not.

The evergreen legend ‘Dharmendra’ had no godfather in the industry and still came out to be the superstar. His two sons ‘Sunny Deol’ and ‘Bobby Deol’ also achieved stardom in Bollywood but in different ways. While Sunny has shifted to politics, you will see Bobby Deol in his latest Netflix release ‘Class of 83’. Talking about Dharam Ji’s daughters, ‘Esha Deol’ and ‘Ahana Deol’, they even tried their luck in Bollywood but could not achieve the popularity like their star mother ‘Hema Malini’. Recently, Sunny Deol also launched his son ‘Karan Deol’ under his direction; let’s see if he is able to make a mark or prove out to be another undeserving nepo kid.

‘Sonakshi Sinha’, daughter of renowned Indian film actor ‘Shatrughan Sinha’ debuted under ‘Arbaaz Khan’ production opposite ‘Salman Khan’ in Dabbang. Out of 22 films she has done to date, only 5 were superhits. She can be clearly seen enjoying the perks of being a star kid. Her brother ‘Luv Sinha’ realized too soon that he was not made for acting and turned producer. Sonakshi will soon feature in ‘Bhuj: The Pride of India’ along with ‘Ajay Devgan’, and ‘Sanjay Dutt’ after her last semi-hit ‘Dabbang 3’.

The son of the veteran actress ‘Sharmila Tagore’, and Indian cricketer ‘Mansoor Ali Khan’, ‘Sail Ali Khan’ made his acting debut in 1993. Out of 59 films he has done in his entire career to date, 14 managed to be hit, still, you will see him getting all the limelight maybe because of being a star kid or because of being married to Kareena Kapoor. On the other hand, his sister ‘Soha Ali Khan’ managed to give 21 flops and one hit in her entire career. If this was an outsider, do you think he would have been given so many chances to prove himself? Following their father, ‘Sara Ali Khan’ has already joined the race of nepo kids while his brother ‘Ibrahim Ali Khan’ can debut soon.

‘Govinda’ is another example of what nepotism should look like. He has entertained us throughout his career not only with his dance moves but his acting skills can’t be matched either. His father ‘Arun Kumar Ahuja’ was also an Indian film actor and has done more than 30 films. Govinda’s nephew ‘Krushna Abhishek’ is a great entertainer and comedian and her niece ‘Aarti Singh’ is also a well-known face of Indian Television. Govinda’s son ‘Yashvardhan Ahuja’ can be an upcoming star kid in 2020 while his daughter ‘Tina Ahuja’ already debuted in 2015 and now can be seen doing music videos.

Did you see this name coming? Married to filmmaker ‘Aditya Chopra’, ‘Rani Mukherjee’ hails from a filmy family. Her father is a retired director while her mother was a playback singer. Even her brother ‘Raj Mukherjee’ was a film producer who has turned director now. She was the part of all-time blockbuster ‘Kuch Kuch Hota Hai’ and recently delivered a great performance in ‘Mardaani 2’. Her brother in law or Aditya’s brother ‘Uday Chopra’ got some hits in his name such as ‘Mohabbatein’, ‘Dhoom 2’ and ‘Dhoom 3’ not because of his acting but due to their own production banner and the other star cast involved.

‘Shahid Kapoor’ got fame for his chocolaty boy looks in the movie ‘Ishq Vishk’ and other romantic roles, however, he also hails from a filmy family. Son of ‘Pankaj Kapoor’ and ‘Neelima Azim’, Shahid then shifted to intense roles and showed the hidden talent in him; ‘Kabir Singh’ was his last blockbuster. His half-brother ‘Ishaan Khattar’ has also entered the film industry. Let’s see if this star kid is able to make it to the top with his upcoming movie ‘Khaali Peeli’ alongside ‘Ananya Pandey’.

‘Rakesh Roshan’ was the star of his time and his son ‘Hritik Roshan’ has again justified their surname. From his debut film ‘Kaho Na Pyaar Hai’ to his latest flick ‘War’, he has delivered more hits than flops and is one of the most deserving star kids. Not only due to his acting skills, but he has also gained popularity for his killing dance moves and is often called the ‘Greek God of Bollywood’.

Son of the legendary superstar ‘Amitabh Bachchan’, ‘Abhishek Bachchan’ was not able to live up to the mark of his father’s name and popularity. He only sustained by playing lead roles in big banner films. However, his recent performance in the web series ‘Breathe-Into the Shadows’ got him all the appreciation.

Nepotism will always be there in Bollywood, and that will not be a problem if talent is kept as the benchmark and not the connections. Gone are the days when the involvement of a star kid was enough to make it a super hit. Nowadays, audiences prefer content-driven films no matter if it has a star kid or an outsider. Nepotism didn’t start with Karan Johar but it should end with Sushant Singh Rajput so that no deserving and talented actor goes unnoticed.