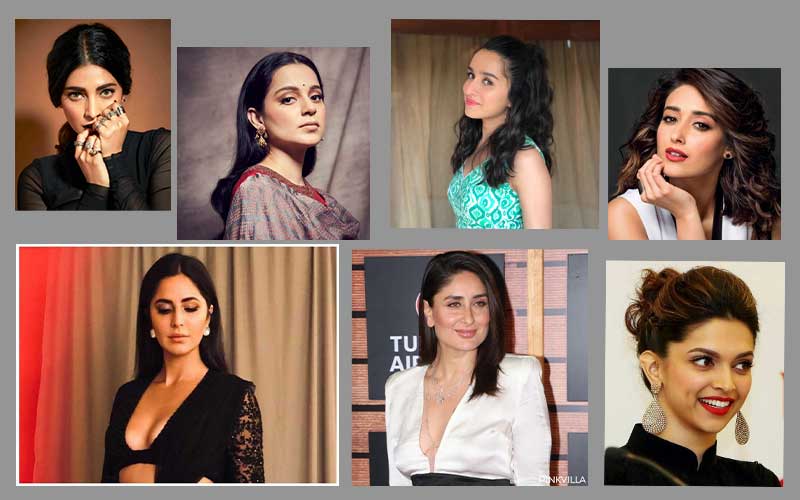 Our Bollywood divas always look picture perfect and this is why they are ruling millions of hearts with their beauty. Every new look of B-Town celebs becomes the trend among people like us. Nevertheless, our actresses are humans too and thus they do not always carry those heavy looks and makeup. Many times, we can spot actresses without makeup. Some of them look really adorable without makeup while others look unrecognizable. So, here are introducing you with the no-makeup avatar of our Bollywood actress. Let’s see how our favorite actresses look without makeup.

Deepika Padukone’s dimples are the cutest features of her and they make her look appealing with or without makeup. She looks equally stunning when she is wearing no makeup. Nevertheless, when she is fully dolled-up and puts her makeup on, she makes millions of hearts skip a beat.

Nargis Fakhri has won several hearts with her charm from the movie “Rockstar”. She has a unique appeal, remarkable features, and a very proportioned body. No matter if she wears makeup or not, she looks equally pretty. But when she has her makeup on, she can set the world on fire.

Anushka has flawless skin that glows like the moon at night. A little makeup adds extra stars to her beauty, but she looks equally pretty sans makeup.

Karishma kapoor has an amazing milky-rose complexion that is inherited. But there is something very charming about her that makes her look stunning without makeup too. With makeup she looks even more amazing.

Priyanka Chopra has become an international sensation. She looks very put together even without makeup. Needless to say, a little makeup gives extra appeal to her personality.

Alia Bhatt can often be witnessed posting bare face pictures on social media mainly Instagram. In the movie “Highway”, she has an all natural look, but she looks very gorgeous with an ounce of makeup. Her smile is the most charming accessory that she wears.

The leading lady of Vicky Donor and brand ambassador of Fair and Lovely is a complete package of beauty and innocence. She looks gorgeous in makeup but even without makeup gives tough competition to the other actresses. Her sharp features and attractive smile created a great impact on the fans.

Katrina Kaif is one of those actresses in the world who doesn’t need makeup to look beautiful, she was born to rule with beauty. Her angelic face and her persona have won millions of hearts in Indian fans. She looks stunning even without makeup and she works hard to maintain her beauty.

Kareena Kapoor is the diva of Bollywood, she sets a new bar for current generation actresses in acting as well as beauty.  She has an innocent face, sharp features and radiant skin makes her apart from the other actresses. Even without make-up, she looks as attractive as with makeup. She gives credit to yoga for her beauty and well maintains the body.

Sonam Kapoor- another Kapoor on this list, started her career with Ranbir Kapoor but rather than acting she is known for her beauty, fashion sense, and lovely smile. She knows how to carry herself even with or without makeup.

The Shakti Kapoor daughter gained fame with her 2013 film Aashiqui-2. Her cute face and charming smile took the heart of millions of fans. Her down to earth nature and simplicity can be seen in her lifestyle. She looks extremely gorgeous without makeup. Shraddha Kapoor is highly active on social platforms where she posts pics and interacts with fans.

Kangana is bold and straight from the shoulder of an actress in Bollywood. This Queen actress perfectly carried the outfits she wore. Her dressing sense and beauty makes her dive into Bollywood. However, without making you can see a slight difference but her dusky look and curly hair catch the attention.

Ileana D’cruz is one the prettiest actresses who is gifted with natural beauty. Her adorable features and an attractive smile are like a ray of light on a night. This south industry actress is active on Instagram where she fluently shares her beauty with fans.

Sara Ali Khan is the fresh face of Bollywood. She has inherited charming looks from her mother. Sara is also referred to as the young clone of Amrita Singh. This young actress made her mark with Kedarnath and became an overnight star with her beauty and acting as well, which is rare nowadays from a celebrity child. She has been spotted without makeup on several occasions and looks absolutely beautiful.

The Singham actress comes from the Tamil industry where nature is preferred over the makeup. Therefore, seeing Kajal without makeup is a usual thing. But damn she looks gorgeous without makeup. Her cute smile and glowing skin don’t need any makeup to catch the attention of fans. Moreover, fans can get a glimpse of her beauty on her Instagram handle.

Sunny Leone is blessed with beauty and appealing features. She is mostly seen without makeup on several occasions. She revealed that her secret for glowing and radiant skin is the workout and balanced diet.

This Sri Lankan beauty made her mark in the Bollywood industry with her beauty and dance skills. Jacqueline’s energy and beautiful smile are enough to make us fall in love with her. Without makeup, she looks stunning, and she is never afraid to show her flaws.

Parineeti Chopra’s shiny face is one of the proofs of her natural beauty. This bubbly actress comes on the list of the top promising young actresses. She looks confident even without makeup and never afraid of showing the natural side of her beauty.

If the talent has a face, it would be similar to Kalki. This talented actress is equally famous for her glamour’s looks and beauty. Her fashion and dressing sense make her a charming diva of Bollywood.

Shruti Hassan is a beautiful actress yet she keeps it simple and mostly spotted without makeup. Kamal Hassan’s daughter is a talented actress and singer. She is the perfect combination of the natural beauty and glamor that makes her a promising diva of Bollywood.

The newbie of Bollywood has a breath-taking smile and beauty. She looks gorgeous even without make-up. Her simple and plain look stole the heart of many fans across the country. She has millions of fans on Instagram where she interacts with them from time to time.

This Bengali bombshell has great features and her dusky looks are appealing enough to catch the attention of the masses. She slays the screen with or without makeup. She is often spotted with casual and no makeup looks.

Shweta Tripathi has delivered some of the great work in recent times. She made her mark in Bollywood with hardcore active. She is known for her roles in Masaan, Mirzapur, and many others. However, this young delightful actress is known for her beauty with or without makeup.

No doubt she is a great and talented actress but she is one of the stylish divas in Bollywood. She looks beautiful in every outfit. Her natural beauty and talent can be seen in movies like Parineeta and Kahaani.

Taapsee is one such actress who doesn’t need makeup to shine on the screen. She can slay the screen with her acting skills. The audience has witnessed her performance in the movie Pink. When it comes to makeup she loves to keep it low and light.

Disha Patani is a member of the younger generation of Bollywood actresses. She was noticed for her performance in MS Dhoni, where she stole the hearts of fans even in the few minute’s roles. Her smile and innocence are enough to get the attention of fans. She looks even more charming without makeup.